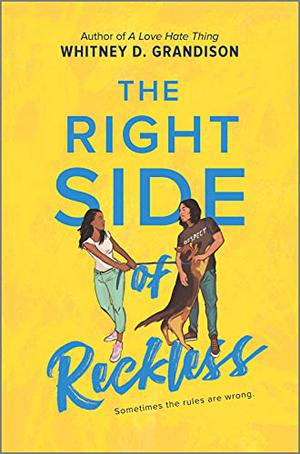 The Right Side of Reckless by Whitney D. Grandison 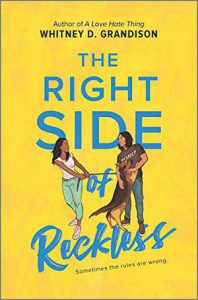 The author of A Love Hate Thing, Whitney D. Grandison has written a new book entitled The Right Side of Reckless. Set in Akron, Ohio, this latest work features several characters to which readers might relate as well as multiple morals about authoring our own life stories and the power of revision and second chances in that process.

On probation for assault, seventeen-year-old Guillermo Lozano calls himself the Patron Saint of Fuckups. Although he has anger issues, Guillermo is determined to shed his reputation as a wild, fearless, and selfish delinquent to find a new life and a sense of belonging in Briar Pointe and at Arlington High School.  Because of trouble with Tynesha, an old girlfriend, Guillermo vows to avoid girls, but he soon finds himself wanting to protect his neighbor and fellow worker, Regan London, as well as a tough and resilient girl at school, Jenaya Omar, who calls him Lethal Weapon.

Further complicating the issue, Regan’s mother, Gloria, is Guillermo’s supervisor at the Briar Park Community Center where he is performing his community service hours. Established to teach juvenile offenders patience, responsibility, accountability, and respect, the Respect program has the goal of rehabilitating probationers. With his probation on the line, Guillermo has to learn that violence can’t always be the answer, even when catcalling and other forms of bullying challenge his resolve. Gloria explicitly tells Guillermo that her daughter is off-limits.

Regan is sixteen and trying to find “her thing.” Shy, sheltered, and vulnerable, she allows people like her father and her boyfriend to make decisions for her.  She dates the school’s star running back, Troy Jordan. Although Troy oscillates between sweet and stubborn, he is handsome and talented. His fan base contributes to his arrogance, however. And when he grows persistent about having sex, Regan resists.  Not wanting to disappoint her father, who loves football, accounting, and Troy, Regan goes along with her father’s dream that she become an accountant. While her father’s dream is grooming Regan to live up to an image he has for her to become Troy’s accountant when he goes pro, Regan has to discover what she wants.  She sees Guillermo as mature, safe, and respectful, but he’s out of bounds.

Along with a cast of other characters, Regan’s younger brother, Avery, and Guillermo’s sister, Yesenia, play key supporting roles in Grandison’s plot. Through her character’s stories, Grandison encourages readers to reject the temptation to passively accept the programming of other people’s molding. Instead, she invites readers to live their own lives—even if that means breaking rules and crossing boundaries established by others.  She provides roadmaps by sharing the lives of various teens as they navigate their numerous obstacles. For example, amidst failure and pain, Regan finds her voice and learns to speak up for herself.

Sharing a playlist for the novel and infusing her book with allusions to various songs and musicians, Grandison emphasizes music’s therapeutic role. For Guillermo, music communicates a way through the rough patches in life, helping him believe that overcoming harsh times and persevering are possible.

With an allusion to the myth of Icarus, Grandison teaches readers that although good people get burned, sometimes strong people are there to help us rise from the ashes.  When we’re down or not strong enough to stand up for ourselves or fly independently, we simply need a hand to cling to or a friend to give us wings. In this, Grandison reminds us of the value in a support system of friends and mentors. Some of us are strong, and some of us are just getting there, but what matters most is being there for one another and lifting each other along the way if one of us falls down. However, Grandison’s novel shares another angle about Icarus. Although there is wisdom in not being reckless, in respecting limitations and not getting so close to the edge that we get burned, there is also exhilaration in experiencing that tiny moment of something beautiful–potentially making the risk worthwhile.

2021-09-08
Previous Post: If You, Then Me by Yvonne Woon
Next Post: Excuse Me While I Ugly Cry by Joya Goffney