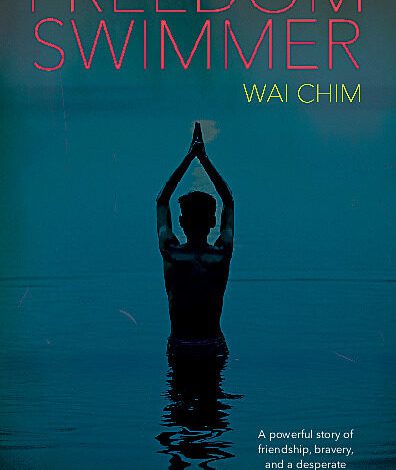 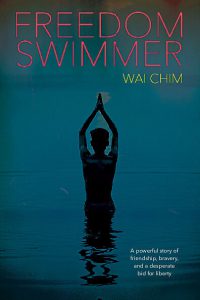 Largely inspired by her father’s own story, Wai Chim writes Freedom Swimmer to capture a tumultuous time in China’s history. Set in Guangdong Province in 1968, the novel reveals the journey of Ming Hong who is orphaned at age eleven. For him, the past dances in dark shadows and whispers of loss and loneliness.

Ming, who is shy and resigned to his fate, loves the ocean—its murmuring, its offer of freedom, and its ability to drown his fears. Swimming not only gives him peace and confidence but brings him closer to his father and the strength of his dream of reaching Hong Kong. At the time of the novel’s setting, Hong Kong is a British Colony, and many desperate people sought the dream of freedom by attempting to reach its shores. The ocean helps Ming forget the pangs of hunger in his belly and the back-breaking labor that is demanded in the fields. The only things that keep him going are his friend Tian and his thought of Fei.

Like a brother, Tian acts as Ming’s protector. He is brazen and grounded—scolding Ming whenever he grows too idealistic. When the Red Guard comes to their rural village, spreading propaganda and Maoisms, it is Tian who brashly insinuates that words don’t feed empty mouths.

Among those who are spreading the ideologies and socialist transformation of China’s Cultural Revolution, Li finds a sense of purpose in the Red Guard—its structure, its bold vision for the future, and its promises of equality. However, he is also somewhat dubious of its claims and expresses fear for the futures of his brother and his sister. Drawn to art and literature himself, Li wishes that his siblings could be engaged in study at a university, pursing their own dreams instead of the Party’s causes.  Many of the schools and universities were closed to encourage young people to dedicate their time to communist inculcation.  Being so far from his family, Li experiences “a constant emptiness in [his] bones” (97) and wonders whether all of his preaching is worth the sacrifices. He begins to doubt the “this great sense of belonging and righteous purpose” (114).

A kinder and less zealous revolutionary, Li befriends Ming, who shares his special cove at the ocean. A patient instructor and exceptional swimmer, he teaches Li to swim. With time’s passing, their friendship evolves, and Li encourages Ming to maintain a communication with Fei. So begins a relationship kept alive through letters. Fei not only buoys Ming’s hope but gives him the strength to endure the hardship.

As he works in the village and learns more of their struggle, Li begins to doubt his purpose with the Communist Party. Weighing the blunt common sense and practicality of the villagers against the argument of intellectuals, Li realizes that school smarts and city mannerisms don’t necessary make him better.  Hearing first-hand about their suffering cements his feelings: “You city folk whined about the tough times when your cigarettes were rationed while we ate nothing but bark and weeds. You call that reform?” (108).

After a series of unfortunate circumstances, Li finds himself at the center of the Party’s wrath. Before long, he is entertaining the dream about which he called Ming a fool: swim to freedom.

Chim’s book is both heart-breaking and hopeful as it shares the desperation and strength of those who endured famine, poverty and political persecution in the hopes of having better lives and greater opportunity.