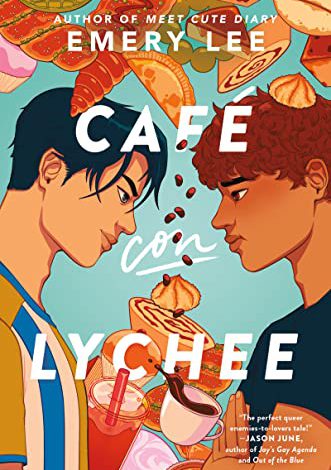 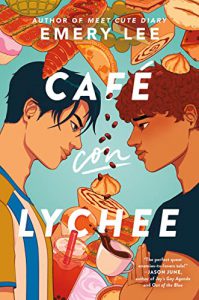 If books need labels, Café con Lychee by Emery Lee would be a romantic comedy that showcases queer interracial love between two people of color. Labels are suggestive of a category and, as such, provide a cognitive short-cut. Yet, labels also invite critical thinking. So, while Lee’s book does indeed feature two gay young men—one Japanese/Chinese, the other Puerto Rican—it dives deeper, emerging as a book about the universal experience of looking for acceptance and how fear makes people do terrible things.

An openly gay boy, Theo Mori is a talented cook and soccer athlete. Even though his friends see him as confident, smart, and popular, Theo is insecure about his intellect—given his ADHD diagnosis and his firm C average—and unsure about his parents’ perception of him. He’s tired of playing second to his “perfect” older brother, Thomas, and feeling noticed only when he’s needed in his parents’ ethnic café. It takes his rival Gabriel (Gabi) Moreno, whose parents own a Caribbean food café, to point out that Theo might be redirecting his anger.

When the World Fusion Café comes to their Vermont town, the two families have to deal with this new competition. Although Gabi hates soccer, he plays for his sports-loving father’s approval. His real passion is ballet, but his parents can’t know about that since “dancing is for girls.” Yet, ballet is Gabi’s only effective anxiety treatment, and given the stress in his life about staying closeted regarding his sexuality, he doesn’t need another worry.

Despite their rivalry, the two young men unintentionally form an alliance against the World Fusion Café. Their constant contact soon has them confiding in one another about their insecurities. Shrouded in shame and unsure if his parents’ love is predicated on their son’s being straight, Gabi wants to be accepted even if he’s not what his parents expected.

Once he gets past his animosity for Gabi, Theo shares with him the ‘good parts’ about being gay: “being able to weed out shitty friends easily, not having to worry about your parents demanding grandkids, and being able to wear colors without worrying you might be seen as not entirely straight” (172).

Under the influence of Lee’s pen, readers learn that many of us spend too much time worrying about what other people want us to be that we don’t make the necessary time for ourselves. Theo says, “Sure, I care what people think, but I’m not gonna let it define me” (172).

Readers also get Lee’s perspective on fear—whether homophobia or some other brand of fear. Because of fear, we often lash out, betray loyalties, or otherwise act irrationally. After all, it’s impossible to think clearly when the brain is flooded with fear or anxiety. While fear is programmed into the nervous system and works like an instinct to protect us from danger, with a phobia, the fear is out of proportion to the potential danger. People can often overcome unnecessary fears by giving themselves the chance to learn about and gradually get used to the thing or situation they’re afraid of.

About homophobia, Lee writes: “Hatred isn’t just in the things a person says. It’s in the way they stay silent when someone else spews hate, the way they nod along or entertain the ideas at all” (245). She leads us to realize that being gay isn’t a bad thing and that we can’t deal with bigotry by being bigoted or by being silent. Eventually, Gabi concludes: “I deserve to be proud of [being gay] in the same way I’m proud to call myself Puerto Rican. It’s just as much a part of me as my own culture” (252).