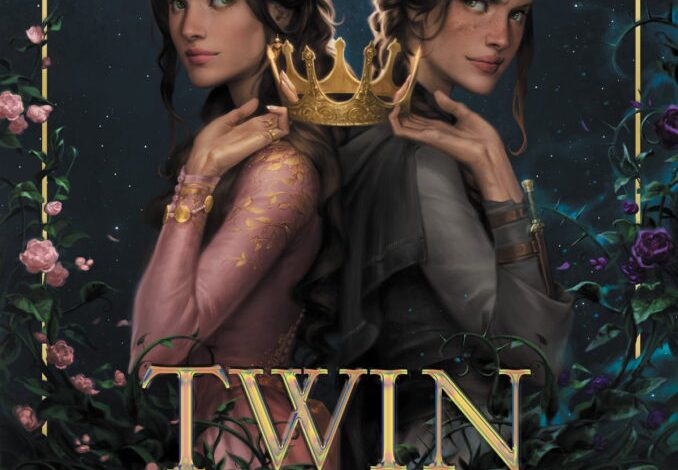 The first installment in a duology, Twin Crowns by Catherine Doyle and Katherine Webber is a fantasy, adventure, and romance story all rolled into one. It features Wren Greenrock and her twin sister, Rose Valhart. The two girls were separated at birth and raised in diverse locales with different values and perspectives.

Rose has lived the life of a pampered princess at Anadawn Palace while Wren grew up near the Whisperwind Cliffs beside the ocean in a commune of witches. Now that Rose is about to be crowned queen, her grandmother has determined that a witch would better serve the kingdom of Eana. So, she sends Wren—who is an enchanter—to switch places with Rose. With a witch queen, the witches will no longer have to live in exile, existing as the target of hatred.

Initially unaware that “magic is slumbering inside her, waiting to wake up and unravel her careful life” (107), Rose has grown up to believe that witches are bad: they killed her parents, started a war, cause corn crops to fail, and are the root of all evil. “Once they are all gone, there will finally be peace and prosperity” (107) in Eana. “Every time a violent story blows in, we fall to our knees and pray to the Great Protector to keep us safe from the witches” (220).

Once the two sisters have switched places, adapting is difficult; after all, we only know what we have been taught. So, learning requires unlearning as new discoveries reveal themselves. Rose’s best friend, Celeste Pegasi, isn’t so easily fooled. Others, too, without their armor, reveal themselves as more than mortals. Wren comes to know one of the Gevran soldiers, Tor, as more than a wrangler well-suited to war.

As the two girls are forced to confront their biases and to rethink their upbringing, readers learn along with them that we often resent, even hate, people for things over which they have no control—whether skin color, location of birth, or parentage. We are all raised with beliefs that cover other ways of knowing, believing, and being. The sisters must decide what they will embrace, what they will discard, and how far they are willing to go to meet their goals.

We also realize that the best way to kill a memory is to stop speaking it aloud. Shen—a warrior witch of whom Rose grows fond—tells Rose that she deserves to hear the stories of her people, the witches. With these new truths, Rose must decide if she can settle for what is good or whether she wants passion, freedom, and true love.

To reach their goals, both must take risks—risks that might change their destinies.