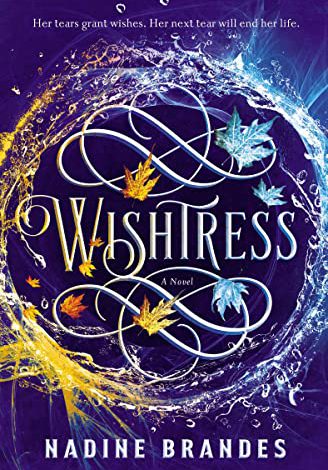 Don’t open Nadine Brandes’ newest book, Wishtress unless you’re prepared to perform some deep philosophical thinking. Brandes takes her readers on a journey with Myrthe Valling and Bastiaan Duur, one that invites reflection and soul-searching while also testing convictions.

When Myrthe cries at age twelve, she learns—with dire consequences—that she is the Wishtress and that each tear she cries has the power to grant a wish. Her oma has known of her granddaughter’s power but has manipulated and oppressed her, using Myrthe as a commodity for personal gain. Myrthe would like to see her power used for social good: wishing for people to have food, warm homes, an income, and better lives. Instead, Oma—“like a treasure-hoarding dragon” (80)—sells Mythe’s tears to grant wishes to those she deems worthy. While skating, Myrthe experiences a sense of freedom. She also finds refuge in her cousin and deepest confidant, Anouk Valling, yet both girls are victims of abusive parent figures.

Bastiaan, too, bears a mark of magic, of a Talent. He believes that every person has value to the world and that all should be counted as equals. Yet, in the fictional setting of Fairhoven, the royal class and wealthy elite have divided people according to their status as Talented or as commoners. On this point, Brandes encourages her readers to wonder why we don’t see ourselves as powerful when we possess a talent, a skill for healing, making bread, growing plants, or perceiving truths when we hear someone’s thoughts. Instead, we often wish for power beyond these gifts, brooding: if only. . . .

In Brandes’ writing, talents are meant for serving the people and the kingdom. “Those with Talents were expected to swear fealty and loyalty to the king, but people with Banes had loyalty to no one but themselves” (46-47). Although a Bane harvests a person’s weaknesses, it also empowers with a certain destructiveness, enabling the individual to exercise control through fear.

Because Bastiaan believes that all people possess the freedom of will to make good or poor choices, he would like to see everyone have access to the Well of Talents. Instead of seeing a Talent as a “selfish thirst for power,” he sees them as existing “to serve one another and the crown, to improve our way of life, like any craft or skill. They exist in all people for a reason. . . . Just as [he] believes every soul has both light and darkness, so a person has a propensity for a Talent or a Bane, depending on which Well they drink from” (89). Someday, Bastaain plans to take Runt to the Well–a location kept hidden by the crown. This ten-year-old snarky and mischievous canal rat has the keen power of “not being seen yet hearing and remembering everything” (128).

As Brandes pens her story, she shares an uncanny acumen, giving clarity to anyone who might wonder about suffering alone. “To share your story is a choice. Don’t underestimate the healing that can come from daring not to suffer alone” (57), Diantha, Bastiaan’s mom tells her son. She also reveals that life rarely progresses according to plan: “Despite our Talents we don’t dictate the moves of this world. We can only learn to balance and skim along the crest of the waves” (64).

And despite her cruelty and control, Oma has a similar wit and wisdom, revealing to Myrthe: “Your life was given to you. . . . A gift. And just because it’s yours doesn’t give you the right to end it” (80). So, even when people use Myrthe’s compassion to take her down and she experiences her deepest despair, she refuses to let her passions perish in a prison cell. She wishes to pass on a legacy of hope and healing. Yet, she further realizes that although hope can fill a hunger, it can also be a dangerous desire. After all, she feels safest with the man sent to hunt her.

Although both Bastiaan and Myrthe make mistakes and miss chances to do what’s right, they teach us all to grow and learn from these missed chances, these desires of the heart. They teach us how to resist temptation and to become the best version of ourselves.

Brandes additionally offers readers a lesson about revenge. Coralynthe resorts to revenge after she experiences the tragic and terrible loss of her sons. Grief-ridden, she seeks to punish the murderer. From Coralythe, we recognize how revenge—both bitter and hurtful—only births more revenge. The power to curse is a temptation, an alluring one with a drug-like calling, forever calling us back for more, for a higher high. Yet, Bastiaan tells her: “We’ve all lost people dear to us under a cruel twist of fate, but not everyone chooses to take revenge or destroy lives in response to grief. Any additional pain with which you’re suffering is brought on by yourself. You are hindering yourself from healing” (403).

The best way to mute a baneful voice is to never give it any attention in the first place. Furthermore, we all have the power of choice, and nothing can overpower our will unless we allow it—not hate nor fury nor anger. “Proper guidance comes from an example of humility and service. Not from power and pride in knowledge” (446). Although faith and hope are a risk of the heart, they are powerful antidotes to fear.