Readers who enjoy dystopian literature, especially the variety presented in books like The Hunger Games series by Suzanne Collins or 1984 by George Orwell, will likely take pleasure in book one of The Torch Keeper series by Steven Dos Santos.  In this new world, benign terms like incentives, recruits, and shelved mask unspeakable malignancy for an Establishment that is focused on genetic engineering and on manufacturing biological weapons. The Culling features Lucian Spark, a sixteen-year-old boy who lives in The Parish, a community formed after Earth was destroyed by the Ash Wars.  Life in The Parish is ruled by The Establishment, which has very strict END_OF_DOCUMENT_TOKEN_TO_BE_REPLACED 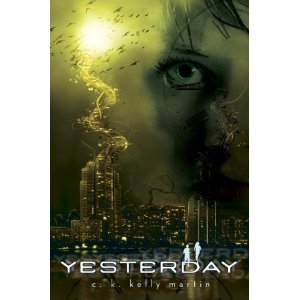 Yesterday by author C.K. Kelly Martin is a dystopian book flavored with time travel, Orwellian, and other futuristic Brave New World elements like genetic and mind engineering. Although the novel features detailsreminiscent of Feed by M.T. Anderson and Little Brother by Cory Doctorow, it offers neither the plot sophistication nor the thematic richness. In fact, the novel’s lengthy exposition spans several chapters before it escalates into action that holds the reader’s attention. The plot revolves around two sixteen year old designer babies, Freya Kallas and Garren Lowe, who look like Greek statues with classical, sculptured beauty. When a Toxo outbreak threatens humanity’s mass extinction, the two teens—whose parents have powerful jobs in END_OF_DOCUMENT_TOKEN_TO_BE_REPLACED