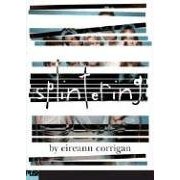 Eireann Corrigan’s novel in verse, Splintering, tells the story of a family whose suburban life is shattered after a home invasion.  While visiting their oldest daughter, Mimi, in the city after her husband left her, a man, high on drugs, breaks into the house.  Dad has a heart attack while fighting him off, brother Jeremy flees to the basement, and mom, 15 year old daughter Paulie and Mimi retreat upstairs until the man breaks down the door and attacks them.  Fortunately, no one dies, but the aftermath unravels the family as each of them deal with the event in their own tortured way. Fierce, angry Paulie and her older END_OF_DOCUMENT_TOKEN_TO_BE_REPLACED 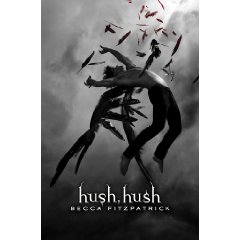 What’s the next big romance now that Bella, Edward and Jacob have found their eternal happy ending?  Will it be a werewolf whose loved and craved a human girl?  Another vampire? Zombies?  In Becca Fitzpatrick’s hush, hush, due from Simon & Schuster in October 2009 (moved up from a Jan 2010 release), our star-crossed lovers are Nora and fallen angel, Patch. To begin with, I love the cover of this book.  In looking for the next tormented bad boy yearning to be good for the sake of his one true love, fallen angels seem like a great choice.  After all, they’re characters whose desires, needs END_OF_DOCUMENT_TOKEN_TO_BE_REPLACED

Justine Larbalestier’s new book, Liar, will be published by Bloomsbury in October 2009.  The early buzz about the book is focusing on Bloomsbury’s choice to have a long haired, white teen on the cover of the book when Micah, the protagonist, identifies herself as a mixed-race tomboy with “nappy” hair. Before realizing Micah’s race, I thought that this cover conveyed a sense of deception and mystery and tied well into the promise on the jacket flap.  But then I started to wonder why the cover would show a girl who is obviously not Micah; unless, of course, Micah was also lying about her race and look? END_OF_DOCUMENT_TOKEN_TO_BE_REPLACED 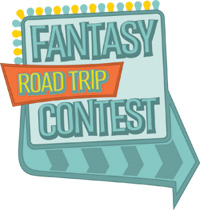 Just for teens who read and are into making videos:  Listening Library is sponsoring The Fantasy Road Trip Contest for teens ages 13-18.  To enter, submit a short film based on an imaginary road trip with a character from a favorite audiobook.  Three winners will each receive an 8GB iPod Touch and a signed audiobook set. Entries accepted until August 17, 2009. END_OF_DOCUMENT_TOKEN_TO_BE_REPLACED

There are some books and movies that capture summertime like nothing else: the long, languid days; the limitless stretches of time; the danger and excitement that comes from the combination of good friends and boredom; and the freedom from school, adult supervision and rules.  Ron Carlson’s The Speed of Light, is just such a book. So much, and really nothing at all, happens to Larry the summer between elementary school and junior high.  Set sometime in the 1960’s, Larry and his best friends, Witt and Rafferty, spend their days playing all kinds of variations of baseball, conducting “scientific” experiments, horsing around with the other neighborhood kids, END_OF_DOCUMENT_TOKEN_TO_BE_REPLACED 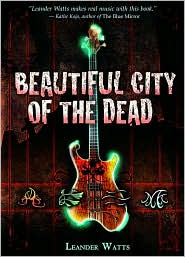 Leander Watts’ novel, Beautiful City of the Dead, reminds me of those amazing albums where great bands use their songs to tell a complex, multi-dimensional story.  Each classic song stands alone, brilliant and enchanting, but when interwoven with the others on the album, makes something deeper, wider and more powerful as the listener lets him/her-self be enveloped in the band’s vision. Of course this interpretation isn’t highly original, since on the surface the story is about a teenage “ghost metal” band – four friends who come together through their music and find meaning and power in their awkward teenage years.  But the way Watts weaves a supernatural, other-wordly elements into the END_OF_DOCUMENT_TOKEN_TO_BE_REPLACED

Edward Bloor’s Crusader is the kind of book I love: engaging plot; exquisitely drawn, realistic characters; and a thought-provoking story where both the characters and a patient reader grow and come to new realizations by the end of the book. When we first meet Roberta Ritter, a 15-year old girl who works, for free, in her family’s virtual reality mall arcade, she’s not much more than a oddball doormat. She’s observant and thoughtful, but also very naive and young for her age.  She tells everyone (and believes) that her mother died 7 years before of a heart attack and since then, Roberta really hasn’t grown up much.  END_OF_DOCUMENT_TOKEN_TO_BE_REPLACED 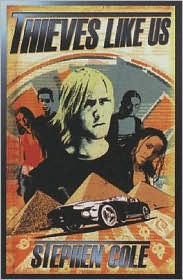 Action, adventure, mythology and high-tech crime are packed into Stephen Cole’s Thieves Like Us.  The first book in an explosive series, Thieves Like Us, introduces us to a crew of brilliant teens whose skill and ambition are harnessed by a criminal mastermind, Coldheart, making them an almost unstoppable band of high-end thieves.  First we meet Jonah Wish, an ultra-talented computer programmer as he’s serving the second month of a year-long incarceration for illegal computer hacking and multi-million dollar theft.  Jonah’s as surprised as the reader when a commotion breaks out in the jail and he’s spirited away by some well-trained, technologically savvy teens to a END_OF_DOCUMENT_TOKEN_TO_BE_REPLACED