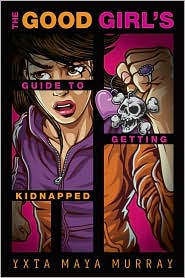 The Good Girl’s Guide to Getting Kidnapped

By: Cori
In: Action & Adventure (YA), Multicultural (YA), On the Edge, Romance (YA), Young Adult Book Reviews

newest novel, The Good Girl’s Guide to Getting Kidnapped, we’re on a high speed, high stakes thrill ride from the first page.

15 year old Michelle Pena is a determined and fierce young woman.  She’s a track star and an excelling student who is living with her gay foster father and working towards a scholarship at a prestigious Los Angeles area high school.  The problem is her past:  Michelle is the daughter of the gang’s leader, and when her dad was killed, her mother took over and ruled the organization with an iron fist.  She’s in prison and Michelle’s brother, Sampson aka “king,” is now serving time in a juvenile detention facility.  But there’s some bad blood and unfinished business, as well as a lot of missing cash, from King’s last drug deal, and the new leader of the gang is going to use Michelle as a hostage to force Sampson to reveal where the money is hidden. What ensues is a heart-pumping, occasionally terrifying episode where Michelle and her best friend are kidnapped by the gang and held in the desert.  There she meets up with her old boyfriend, and current #2 in the gang, Silver, and they realize how far apart they’ve grown since Michelle left and Silver spiraled down into the violent world of retribution and vengeance that is a big part of gang life.

Raising issues of identity and loyalty, The Good Girl’s Guide to Getting Kidnapped is loaded with street dialogue, visceral emotions and scenes from gang life that ring all too true.  Michelle and Silver are both offered the chance to grow beyond the destiny and identity that’s forced upon them, although Murray makes it clear this won’t be easy or painless.  Through the course of this captivating story, both Michelle and Silver come to terms with the choices they’ve made and the realization that their life is still theirs to choose, if they have the courage of their character and convictions behind them.