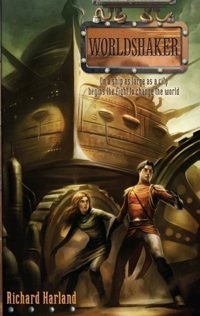 Australian author Richard Harland’s newest book, Worldshaker, is an action-packed, fast-paced thrill ride that grabs the reader from the first page and keeps you riveted until the satisfying conclusion.

Col Porpentine is the

grandson and heir to the supreme commander of the juggernaut Worldshaker. A technological marvel, Worldshaker carries over 10,000 people, including the nobility from the Old Country (formerly England) on an endless trip around the world, consuming resources and leaving a trail of destruction behind.  Col is a privileged member of the upper decks and has never questioned the order of things, the mastery of his people, and the mission of Worldshaker.  But then he meets Riff, a Filthy girl who has escaped from the bottom of Worldshaker, where she’s part of the servant class that powers the ship.   Her drive, determination and strength of character, as well as her beauty,  enchants and frightens Col.  Against his better judgement, Col helps Riff avoid capture as she hides out on the upper decks, and they begin to spend more and more time together.  He starts really looking around at his world, and he begins to question everything he’s been raised to believe.  If Riff’s to be trusted, then everything about Col’s world is based on injustice and lies, and he’s the only one who’ll be able to do anything about it; but it will cost him everything he thought was important.

Throughout this action-driven, steam punk adventure, Harland keeps readers engaged with a plot that rolls on like the juggernaut itself.   Harland weaves questions about slavery, class, and an individual’s ability to stand up to a corrupt society into the novel so subtly that the reader thinks about these moral dilemmas without even realizing it; instead, we are beside Col every step of the way as the layers of his world are peeled back and its true horror is revealed to him.  In the end, he chooses to stand up for what’s right, even in the face of terrible consequences, and we’re there cheering for him and Riff as they work together to start a new age.