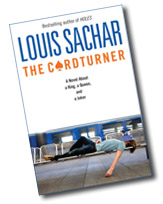 By: PBCReader
In: Middle Grade Reviews

Let me start by saying I looooove Louis Sachar’s books! All of his work until now has been for an intermediate audience, 4th – 6th grade. Sideways Stories, There’s a Boy in the Girl’s Bathroom and Holes all read as if someone is telling the reader a good story. Sachar’s latest, The Cardturner, doesn’t disappoint in that regard. Alton is volunteered by his parents to work for his wealthy uncle over the summer after his junior year in high school. His mom hopes he’ll get into the old man’s good graces and leave the family part of his fortune. Alton’s job 4 days a week is to take his uncle to his bridge matches where he will read and play the cards under his uncle’s direction. Illness has made Uncle Lester (aka Trapp) blind. I don’t know any young adults who play bridge or maybe even know what bridge is. Sachar acknowledges that in the book as he once again speaks to the reader as a friend but the fact remains; a book about bridge will not attract new readers. Sachar himself is an avid bridge fan/participant. He does summarize the lengthy descriptions of bridge moves for the reader who isn’t interested in the strategy but to this non-player it might as well have been in Latin!  The book reads quickly and the humor is fun, if not sophomoric, for the YA audience.

I will recommend The Cardturner to my 7th graders reminding them of Sachar’s past jewels and hope that the presence of a card game their grandma plays doesn’t turn them away. I wish the author had wound this tale of self-realization, love, and respect around baseball or a video game simply because it would be easier to sell to a 21st century reader.