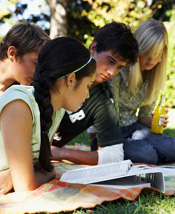 You Are Not Here

Book description:  Annaleah and Brian shared something special – Annaleah is sure of it. When they were together, they didn’t need anyone else. It didn’t matter that their relationship was secret. All that mattered was what they had with each other.  And then, out of nowhere, Brian dies. And while everyone else has their role in the grieving process, Annaleah finds herself living outside of it, unacknowledged and lonely.

Reader Review:   You Are Not Hereby Samantha Schutz was a great read it captured my interest within the very first few pages. It made me look at how to deal with the death of a person I know in a different way than I have before. It was touching and captivating.

Book description:  In this continuation of noted mythologist Scott’s Nicholas Flamel series, Awakened twins Sophie and Josh join a quickly aging Nicholas and Perenelle in a fight to save the world from menacing creatures housed on Alcatraz.

Reader Review:   The Necromancer by Michael Scott was a captivating read it pulled me in and kept me reading with its action and fantasy. It left me wanting to read and read. It left off in a cliff hanger to leave you wanting to read the next book in the series The Secrets of the Immortal Nicholas Flamel

Book description:  Sixteen-Year-Old Jace Witherspoon arrives at the doorstep of his estranged brother Christian with a re-landscaped face (courtesy of his father’s fist), $3.84, and a secret.  He tries to move on, going for new friends, a new school, and a new job, but all his changes can’t make him forget what he left behind—his mother, who is still trapped with his dad, and his ex-girlfriend, who is keeping his secret.  At least so far.  Worst of all, Jace realizes that if he really wants to move forward, he may first have to do what scares him most: He may have to go back.

Reader Review: Splitby Swati Avasthi is a great read it shows the dimensions of a messed up and abusive family in a way I have not read before. It shows the ties of family and friends in stressed times.