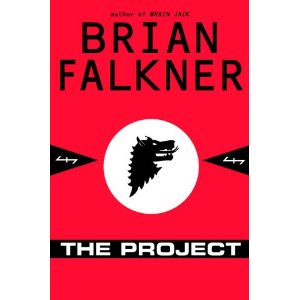 Sci-Fi Action author Brian Falkner creates another fast-paced, twisting and turning thrill ride in his latest novel, The Project.  Best friends Tommy and Luke like to pull mostly harmless pranks and enjoy horsing around.  Even though their latest prank lands them in some serious trouble at school, they still volunteer with to help the local university library try to save its rare book collection from the impending threat of a fast moving flood.  While helping out, Luke discovers the only copy in existence of a rare book based on Leonardo da Vinci’s drawings and theories. Because he’s been researching “the most boring book in the world” (as part of the punishment for their prank), Luke knows this book is worth millions.  He and Tommy rashly decide to brave the storm and break into the library to steal the book and sell it for cash. But they find they’re not the only ones coming for the book and barely escape from the raging river, flooded library, and gun-toting thugs who are also snooping around.

Trying to figure out who the men are that are after the book (and Luke & Tommy by extension), the boys do some spy-inspired detective work, turning up all sorts of strange clues that point to a secret organization from Hitler’s Nazi Germany.  Luke realizes that the book holds the secret to the shadowy men, the plans for a weapon hidden in the thugs’ hotel room, and the disappearance of their English teacher.  He & Tommy make rash decisions, take crazy chances, and rely on luck and calculated risks to unlock this mystery before the villains can use the book’s secrets to wreak devastation on the past, the present, and the future.

The Project is a great mystery for guy readers who like fast pacing, high energy and lots of action.  There are no big issues, girls, or day-to-day problems to get in the way of having a good time with Luke and Tommy.  It’s a fast, fun read with an intriguing premise and lots of theoretical possibilities.