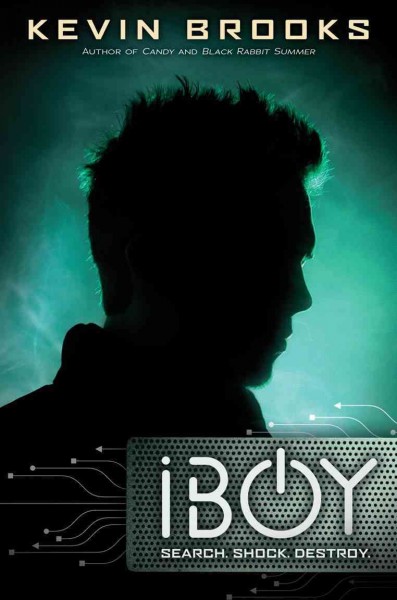 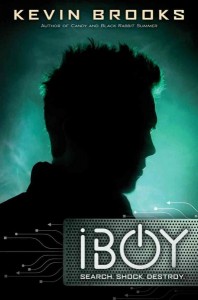 In a 21st century twist on the superhero genre, Kevin Brooks gives us iBoy.  Tom Harvey is a average teenager living in the lowerclass section of London, in a housing project rife with gangs, drugs, violence, hopelessness and poverty.   Not one to meddle in affairs that don’t directly impact him, Tom keeps his head down and muddles along.  On a day when he’s going to visit Lucy, a girl in the projects he’s known since childhood, Tom’s fate is sealed: an iPhone is thrown from the 3oth floor, hitting him in the head at 77 miles per hour, fracturing his skull and embedding its components deep into his brain.  As the iPhone integrates itself with Tom’s brain, Tom gains access to WiFi, websites, mobile phones, unlimited information, and all aspects of modern day technology, including the ability to harness powerful electrical charges.  Sparked by the brutal gang rape of his friend Lucy, Tom uses his iPowers to hunt down the gang members who assaulted her, punishing them in a myriad of ways using the technology that surrounds them.  Eventually realizing that the lower level thugs are empowered from above, Tom sets his sites on the shadowy leader of the crime world in the projects. iBoy steps up his vigilante justice until a final showdown reveals both the expanse of Tom’s iPowers and the depth of the price of using those powers to help others.

iBoy‘s techno-superhero premise is the alterego for a gritty meditation on revenge, gang violence, power and morality.  Like in his other works, Brooks creates flawed characters caught in complicated situations where right isn’t always right and wrong isn’t always wrong.  Tom’s journey into his iBoy self is fraught with peril as he quickly falls prey to lure of his iPowers and the moral ambiguity of what he’s doing becomes more than he knows how to handle.  The culture of gang violence, poverty, and drugs permeates this superhero story and one is left to wonder if vigilante actions born of good intentions, a sense of injustice, and unlimited techno-power would be the answer to or ultimately part of the problem.  Little surprise, but Brooks provides no easy answers in iBoy.