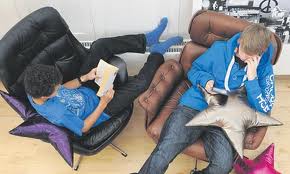 By: Cori
In: Ideas You Can Use, Reaching Reluctant Readers, This is interesting

Study finds e-readers have opposite effect on middle school girls who struggle with reading (blog.smu.edu – Posted on March 21, 2012 by Margaret Allen)

Middle school boys rated reading more valuable as an activity after two months of using an e-reader, according to a new study.

The findings come from a study of 199 middle school students who struggle with reading and who participated in a reading improvement class that included Amazon’s Kindle e-reader, said one of the study’s authors, Dara Williams-Rossi, Southern Methodist University, Dallas.

The researchers found that boys consistently had a higher self-concept of their reading skill than girls both before and after using the e-readers. After use of the e-readers, boys’ attitudes about the value of reading improved, while girls’ attitudes declined, said Williams-Rossi, an assistant clinical professor in the Annette Caldwell Simmons School of Education and Human Development at SMU.

Technology motivated boys; girls appear to prefer actual books
“The technology appeared to motivate the boys to read, while many girls preferred the actual books,” said Williams-Rossi, who is also director of undergraduate programs in Simmons. “The data showing the girls’ preference were statistically significant and particularly intriguing. This is part of a 3-year study and this data came midway through, so we are continuing our investigation and interviewing girls to understand their reaction to the e-readers. It may be that they prefer curling up with actual books and that they enjoy sharing their reading with their friends.”

Among the findings, students generally liked using e-readers and many felt that using it helped their reading improve. Sixth- and seventh-graders were more enthusiastic than eighth-graders about the e-readers, the researchers found.

Read the rest of the findings from the SMU Study HERE