If there was ever a character about whom you could say “what doesn’t kill you makes you stronger”, it would have to be Harrison Johnson in Tim Green‘s latest, Unstoppable.  Harrison is only 13 years old, but in his short life he’s already faced abusive foster parents, beating and intimidation from his fellow foster kids, a system 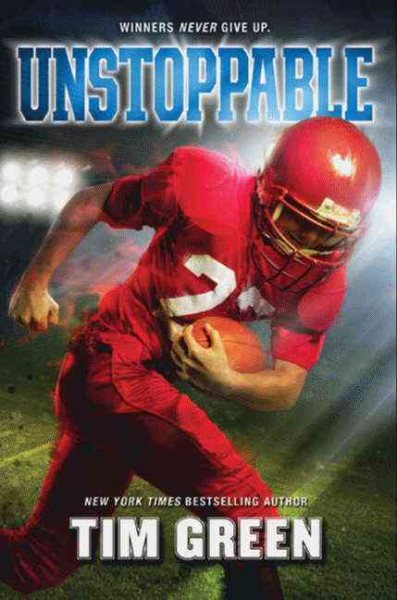 set up to break him down, and the realization that his own mother will never be able to care for him like  a mother should.  When he catches a break and gets away from his most abusive foster family yet and lands in the loving, peaceful home of Coach and Jennifer Kelly, Harrison can barely trust that things could really be OK.

A big, strong kid, Harrison is drawn to football which seems tailor-made for him.  Coach puts him on the middle school team at his new school, and Harrison blows everyone away with his raw power and unstoppable drive.  Used to going it on his own, Harrison doesn’t know much about working on a team and his all-or-nothing drive alienates a few team members and gets him some new enemies.   But a few bullies at school is nothing compared to the next harrowing trial Harrison will have to face: the discovery of a rare type of bone cancer and the amputation of his lower leg.  As Harrison had feared, his chance at a seemingly great life has evaporated before his eyes, sending him into an angry depression.  But it’s not Harrison’s fate to be lost to a horrible circumstance: the means by which he can learn to fight his way back comes in the form of the Major, Coach’s best friend and a Desert Storm veteran, who knows exactly what Harrison faces and what he needs most: hope.

Tim Green fans will relish Unstoppable because it’s full of the same pulse-pounding on the field football action, high-stakes energy, and honest, raw emotion they’ve come to expect from this former football hero turned YA writer.  Harrison faces a lot of challenges in Unstoppable, but he eventually learns to channel his rage, his formidable will, and his “never show weakness” attitude in a proactive direction, and he becomes an inspiration to any reader feeling like the challenge ahead may be too much to handle.  An even more powerful lesson Harrison and the reader learn in Unstoppable is this: you don’t have to face those challenges alone; there are people around you, like the Major and Harrion’s foster parents and friends, whose belief  in you can be the support you need to build up your own belief in yourself.