That Time I Joined the Circus 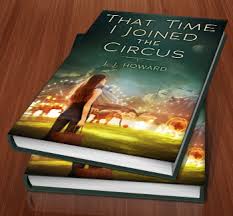 That Time I Joined the Circus by J. J. Howard isn’t a typical runaway story but it is one rich in circus sounds and sensations.  The author’s obsession with music is obvious in the lyrical headnotes to each chapter and in the many allusions that occur in the text—making this a book for music lovers and for those who live their lives with their own sound track or play list.

Although the circus plays a role in Howard’s text, this is really Xandra Ryan’s story—her disparate identity is obvious in her many names: Lexi, Alex, and even X.  Feeling like Doormat Girl who only gets asked out by social cue-impaired guys, Xandra yearns for graduation and an escape from Sheldon Upper School, an elite private school where life feels both unfun and fake.  Xandra resists the fakery with sarcasm, a trait which keeps her on the fringes of most social circles.  She refers to herself as the antipode to Adventure Barbie (AB): “Girls like me, who are relatively smart and pretty, who have something to say, and who have their own points of view” (45), spend every Friday night home alone because guys prefer AB—that girl that is equally at home zip-lining and fine dining and is no match for a regular girl.

Xandra finds her life even more surreal after her dad’s death, a tragedy for which Xandra in part blames herself because she didn’t respond to a premonition.  Having been abandoned by her mother eight years previously and having recently alienated herself from her best friend Eli Katz, Xandra has no where else to go, so she joins the circus in search of her nomadic mom.

Feeling like a package sent to the wrong address, Xandra experiences deep loss and struggles to face her heart-stabbed future.  But circus life is nothing if not a family oriented one, and soon Xandra—who works her way from excrement shoveler to fish pond worker on the midway to telling fortunes with tarot cards—finds herself attracted to Nick and Jamie and befriending the sister act, Liska a Lina, two trapeze artists.  These friendships, despite their value, don’t feel the void left by dad or Eli.

Although this book gives readers up close exposure to Xandra’s extreme funk and the futility of maybes and of wishing to make something so, it also shares truths about the value of forgiving ourselves of our shortcomings and mistakes.  Another moral defines home as more about people than about place, as a who, not a where.  Eventually, Xandra figures out who her home is and finds a way to keep them with her.  She also finds the map that guides her to fun and her future.