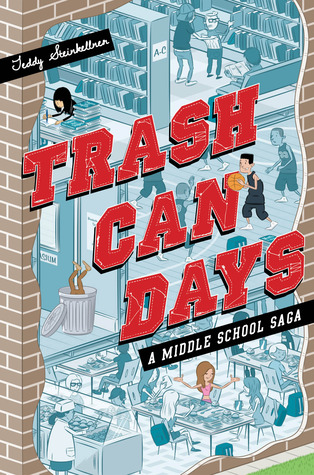 For readers who appreciate the diverse and non-linear approach offered by multi-genre books like Nothing But the Truth by Avi and Tears of a Tiger by Sharon Draper, Trash Can Days: A Middle School Saga by Teddy Steinkellner shouldn’t disappoint.  Told through Facebook entries, letters, school announcements, memos, AIMs, lists, blog posts, and typical prose, the story puts readers in the hallways and the social circles of middle school drama.  In the midst of the commotion caused by gossip, the cruelty used to get respect, and the floundering that occurs on the journey to maturity, readers live or relive the days when crustacial hair and constipated faces made us laugh, when some of us weren’t ready yet to leave childhood behind, when identity was TOTALLY confusing, and when the pecking order actually hurt.

Steinkellner reveals the plot mainly through the alternating perspectives of four characters: the eccentric and creative Dorothy Wu, the emotional and slow to mature Jake Schwartz, the snarky and yearning to be popular Hannah Schwartz, and the handsome and athletic Danny Uribe.  Readers follow these mostly stock stereotypes through a year at a Southern California junior high school.  But Steinkellner seems über-aware of how he has pigeonholed these tween personalities, making the issue of labels—their nefarious and cruel limitations, their trash talk tendencies—a primary focus of his book.  His true-to-life scenarios invite readers to redefine bullying in all of its forms—whether basic meanness, Judas behaviors, cyberbullying, stereotyping, or full-blown violence.

Besides those lessons about how much words and actions really do matter, readers also learn that in an effort to invent or to rehab an image or to find an identity and a place to belong, the notion of being big, bold, and badass can backfire.

Although much about junior high is hurtful: the categorizing, ranking, and being made to do random, confusing things, readers of this saga remember what it is like to play like a kid again, how much fun it is to connect with the stuff we used to do.