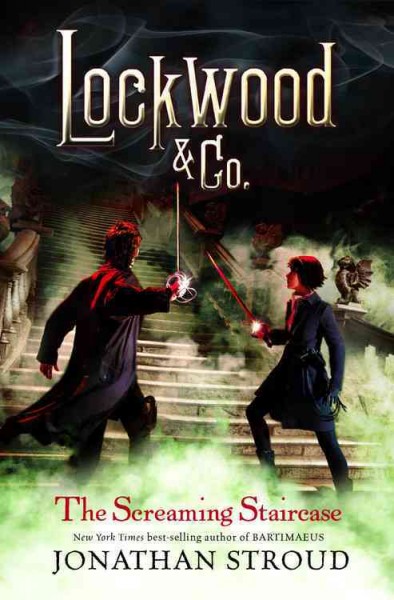 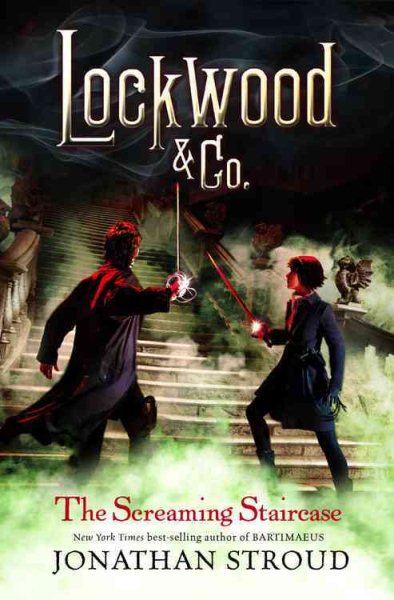 I love a good, spine-tingling mystery.  Smart detectives, heart-pumping tension, dark and spooky locales, they’re all it takes for me to get lost for hours.  And I especially love it when the plot is so well constructed  it weaves in and out on itself, and is chock full of false clues, hidden gems, and tiny, realistic details that sparkle and pop like a faulty flashlight on a pitch-black night.  So imagine my thrill as I was drawn into The Screaming Staircase, the first book in New York Times best-selling author of the Bartimaeus series Jonathan Stroud‘s, new series Lockwood & Co.

For the past fifty years, the British Isles have been plagued by the Dead and no one knows why.  Ranging from slightly frightening to deadly, ghosts, ghouls, spirits, and specters haunt the countryside and the cities and only children and teens have the psychic abilities to see and eradicate them.  An entire industry, including psychic detective agencies (staffed by children and supervised by adults), have emerged to fight this menace to society and try to provide a sense of “normalcy” to a ravaged and frightened population.  Lockwood & Co., an independent, adult-free agency headed by charismatic teen Anthony Lockwood and staffed by George, a sarcastic, book-smart fellow and Lucy Carlyle, a smart, talented, and courageous young woman, has had its share of cases, none of which have put the agency “on the map,” mainly because, as Lucy admits: “in a variety of ingenious ways, we succeeded in messing them all up.” (5)

After the disastrous ending to their most recent case, which revealed the long-hidden corpse of a murdered young socialite, in order to save the agency the teens are forced to take on the perilous investigation of the most haunted house in all of England, Combe Carey Hall.  Over the years, agents from other companies have died in The Red Room in the Hall and no one has been able to discover the Source of the haunting in the Screaming Staircase within this centuries old building.  If Lockwood, Lucy, and George are to survive the night and uncover the truth behind the many mysteries that surround them it will take everything they’ve got, and even that may not be enough.

In The Screaming Staircase, Stroud expertly combines three well drawn, interesting characters, a world rich with detail and full of potential backstory and plot lines, and lots of deliciously creepy villains (both supernatural and flesh and blood) into both a “stay-up-well-passed-your-bedtime” novel and the fertile ground from which an “I-can’t-possibly-wait-for-the-next-installment” series will surely grow.  I, for one, am already ready for the next specter in lurking the shadows.