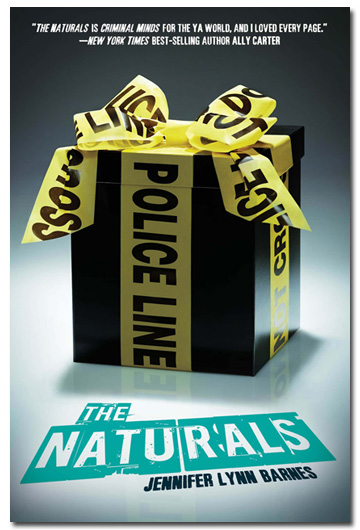 hat Jennifer Lynn Barnes has advanced degrees in psychology, psychiatry, and cognitive science is obvious in her new book, The Naturals, a book sure to appeal to readers like me who enjoy television programs like Criminal Minds and Cold Case.

The book stars seventeen-year-old Cassie Hobbes, who describes herself as odd: “odd-looking, oddly quite, always the odd one out” (17).  While “other kids spent their preschool years singing their way through the ABC’s” (9), Cassie was learning a different alphabet: the BPE’s, tricks of her psychic mother’s trade: behavior, personality, environment.  When her mother is murdered, Cassie ends up in Colorado with her loud extended Italian family because her father serves in the Air Force.  Never feeling at home here, when FBI Agent Briggs invites her to Quantico,Virginia, to work for the Bureau’s classified program, she eagerly accepts.

Briggs has summoned Cassie for her ability to read people, take in little details, and figure out the big picture. A natural profiler who has an aptitude for reading clues and making sense of them, Cassie joins a deception specialist, a statistician, another profiler, and an emotion reader: Lia, Sloane, Dean, and the criminally handsome Michael.  This team of teens uses their skills to read criminals—their personalities, their beliefs, their desires, and their proclivities for torture, mutilation, and death.  Each teen has his/her own motives for joining the program, but their broken pasts intervene and those interventions threaten their safety.  When they begin to investigate Cassie’s mother’s death, Cassie gets caught in the killer’s web.

This book features the multiple twists and turns, clues and potential leads that are typical of the criminal mystery genre.  It also includes a romantic subplot and explores the question of whether we can escape the legacy of bad parenting, whether we can survive the scars.