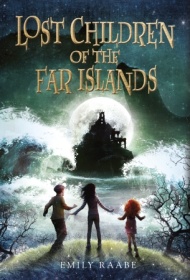 Lost Children of the Far Islands One month before their 11th birthday, all is peaceful in Maine for the Brennan twins, Gus and Leo, until their mother develops a mysterious illness and boats begin to mysteriously disappear.  These freakish events are just a beginning, however, as solitude turns to emergencies, screaming, lying, and nighttime visitors.  And Ila, who has never previously spoken in her five years of life, starts to speak nonsense about morays and watchers.

By the time a shape-shifting messenger arrives, Gus is furious, frightened, confused, and full of grief, but she and her siblings step out of their previously idyllic life into something completely unknown.

The Bedell takes them to one of the Far Islands, Loup Marin, where they learn much about their kin, their past, and their fate as part of a prophecy.  They also learn about the Dobhar-chú, King of the Black Lakes, a hideous and evil monster responsible for killing, terror, and desolation.  The spell rendering the king powerless is about to expire, and the Brennan trio must take on the challenge, a battle which involves harrowing experiences, snarling wolves, and charging sharks.

Tweens will love this book for its adventure , daring exploits, and magic.   Lost Children of the Far Islands by Emily Raabe is a cross between the Fablehaven series by Brandon Mull and the Series of Unfortunate Events series by Lemony Snicket.  A perk of the book is its language of sea life.