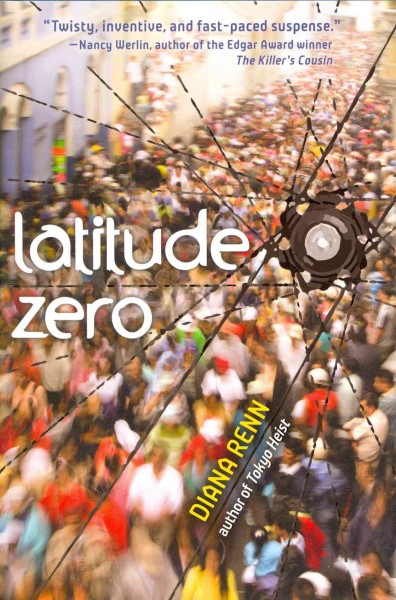 By: Donna
In: Action & Adventure (YA), Multicultural (YA), Mystery & Suspense (YA), Sports (YA), Young Adult Book Reviews Jake Collier is a cyclist, a fierce competitor and a smart strategist.  He’s also a bit jealous of his talented teammate Juan Carlos from Ecuador.  Caught in the middle is Tessa Taylor, the seventeen-year-old host of KidVison, a television show for young people that runs on Greater Boston Cable News (GBC N).  Although Tessa is known as the “PBS Princess” and Juan Carlos is known as the “altar boy,” Diana Renn’s book Latitude Zero proves that we are all more than a nickname.

Set in both Cambridge, Massachusetts (latitude forty two), and Ecuador (latitude zero), where poinsettia trees grow wild and unpruned among the lush green near the middle of the earth, Latitude Zero is a sports story with spokes of mystery, intrigue, multicultural flair, and power plays fueled by greed and selfish interest.

When Tessa agrees to bandit ride with Jake at a charity event, she sets off a chain reaction of complicated events with unanticipated consequences and quickly learns the effects of deception and bad decisions.  The PBS Princess loses her reputation and her job with GBCN and the altar boy ends up dead.  Because Tessa blames herself, she makes it her mission to solve the mysteries that surround Juan Carlos’ death.

The mission begins with her involvement with Vuelta, meaning to turn in Spanish.  Vuelta is a charity organization whose motto is Bikes change lives.  Juan Carlos, a spokesman for Vuelta when he was alive, believed bicycles to be one solution to turn around problems like pollution and poverty.  With Vuelta, Tessa meets Marisol Vargas, an assistant bicycle mechanic.  Together, Tessa and Mari tackle the mystery of what looks like murder in an effort to turn against their attackers and to turn them in to the authorities.  In order to do that, however, they need more than circumstantial evidence.

Tessa’s experience as an investigative reporter serves her well as she attempts to piece together the clues, which expose various suspects—including her former boyfriend, Jake.  But she also becomes a target for a circle of criminals who threaten her and her family and stalk her movements.  Since she was the last person seen talking with Juan Carlos before his death, she is the target of a phone hacker, a knife packer, and a hack writer.   These explorers—Darwin, Pizarro, and Balboa—are looking for information, and they follow Tessa all the way to Ecuador to get it.

Living a sheltered life with premade decisions and taught to be cautious, Tessa must rise to a challenge that she’s not sure she can tackle.  Not accustomed to lying, Tessa questions her motives as she lets people down when trying to do the right thing.  Because she feels pressure to meet or exceed  expectations, the ride she’s on calls on her to take multiple risks in the name of justice.   With the lines between right or wrong, good or bad, constantly shifting, Tessa finds herself on a ride to the finish line of a nightmare.

Readers who gravitate towards sports stories, mysteries, or excitement will not be disappointed with Diana Renn’s novel due out in early July!