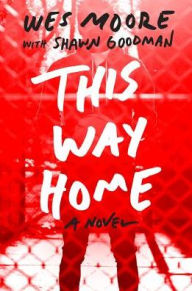 The embodiment of athletic purpose, graceful and resolute, Elijah Thomas is 6’4” and carved out of steel, according to his best friend, Dylan Buchanan.  With his rhythmic dribbling skills, Dylan is no slouch on the court either.  The two juniors, teammates on Maryland Public Secondary School’s basketball team who have been playing together since boyhood, help their high school team win the state championship.  Now, they’re ready to play in the adult tournament, Hoops, on the Battlegrounds, a

n asphalt court in the neighborhood where practice and pickup games take place.  Despite their talent, can the boys “compete in the adult division, against college guys, hard-core street ballers, and trash talkers with more muscle and body ink than skill” (111)?

Their fellow teammate, Michael Henderson—the reigning champ of trash talk who swears to the Patron Saint of Expensive Footwear that there are no strings attached—produces new shoes for the boys so that they can play in style for the three-on-three tournament.  All three boys are hoping for their ticket out of West Baltimore after their senior year, but Elijah is the only one with the sheer talent, the 3.8 GPA, and the never-been-in-trouble reputation.  Elijah seldom participates in trash talk because he believes “talk is energy, and he wants all of his energy to go into the game” (42).

When Michael also delivers jerseys with the Blood Street Nation (BSN) logo, Elijah realizes trouble has found him at last; for the price of shoes and a jersey, he fears he has sold his soul and his talent to the bloodiest gang in town.  If he puts on the jersey and plays for BSN, his dreams might come true.  “All electric and powerful, muscles fibers burning and twitching” (24) with potential and promise, Elijah wants respect for his skill and ability on the court.  He wants a college scout to see his game and offer him a scholarship—a full ride out of town.  He hopes that his winning ways will capture the attention of his absent father, who Elijah dreams will—after fifteen years—reunite with his son.  “His father’s absence was as real and unyielding as the pavement under his feet, and it never stopped hurting” (9).

If he doesn’t play, his mom may get hurt, or worse.

Protecting his dreams and his mother will take unconventional warfare, the tactics of which Elijah learns from Mr. Banks and his daughter Kerri.  Nineteen-year-old Kerri is seriously bodacious, always two steps ahead, and fearless.  Planning to major in forensics and criminology, Kerri hopes to join the FBI.  Her father is a former military man, famous for his surly attitude and his law of the inevitables: “If the circumstances demand action, then it’s best to act immediately.  Without deliberating. . . . Thinking and weighing the odds just gets in the way” (94).

This Way Home, a tragic sports story by Wes Moore with Shawn Goodman, features a fast-paced plot with interesting twists and turns.  On his survial journey, Elijah learns some hard lessons and wonders whether safety and happiness are just illusions, how life can go on–almost indifferently–after death, and that “sometimes the dream is more important than the thing itself” (54).  He also learns that home–more than just a place–is also an idea about security and human connection.  Readers of books like Ball Don’t Lie by Matt De La Peña, Slam! by Walter Dean Myers, or Tears of a Tiger by Sharon Draper are sure to enjoy this equally gritty novel.