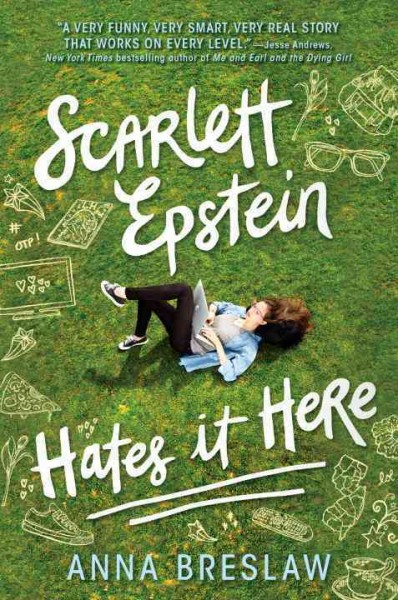 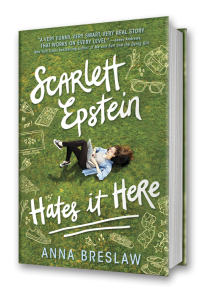 In real life (IRL), Scarlett Epstein attends Melville High; she’s sixteen years old and the product of a home broken by divorce.  To escape the mundane fakery she encounters in school—where everyone’s life seems defined by relationship drama, financial status, and popularity—she writes fan fiction based on the Lycanthrope High series created by John St. Clair and posts it online.  In writing group fashion, her online forum of friends share their alternate plots and embellished characters and give one another feedback.  But when the show is cancelled, Scarlett feels adrift and without a purpose.  Writing makes Scarlett feel like a real person; it allows her to unravel feelings she cannot talk about—especially feelings for Gideon, whose wealthy father doesn’t approve of his love for stand-up comedy.  Even though Scarlett invests more time in fictional characters than in real people, Gideon “gets her.”  He also grows beyond her as he seeks out the popularity that Scarlett snubs, claiming to be above the popularity stuff.

Despite her 2.9 GPA and perhaps because of her best friend Avery, Scarlett identifies with the Girl Geniuses, “a small clique of overachievers who run on Adderall and fear and have gears you can always see turning” (5).  Since she is not willing to be fake, to adopt a persona that will help her fit in, Scarlett hates her real life.   A self-proclaimed misanthrope, Scarlett wants to live in a world where everyone is smart, articulate, and creative; a world where everyone is accepted for who they are, not judged and ridiculed.  Because she doesn’t find that IRL, she creates a fictional world, a world where Jack Daniels isn’t the “patron saint of boys who try too hard to be men” (125) and where nothing is quite what it seems.

Ordinaria, her speculative fiction serial on the Internet, takes on a satirical edge with a robot subplot and with characters based on Scarlett’s real life school mates.  When her FanFic friends discover her Mary Sue mistake, they force Scarlett to examine her motives for wish fulfillment.  Her elderly neighbor, Ruth, about whom she wrote a report during freshman social studies, also pushes Scarlett to self-examination.  Ruth, a joint-smoking, bourbon drinking woman who taught women’s studies for 34 years, finds therapy in gardening.  She and Scarlett bond over Ruth’s flower garden.  While they work and weed, Ruth shares her brand of wisdom, not the “Tuesdays with Morrie bullshit” (47) but a raw truth about words that fly off our tongues unfiltered by brain power and logic.  A woman of contradiction, Ruth encourages Scarlett to stop fantasizing and to take advantage of her “ass hole window,” ages teen to 21, with some risky or courageous behavior that pushes her beyond her comfort zone.

As Scarlett rides out the waves of trouble and tackles the turbulence that tries to knock her off balance, she learns some valuable lessons about cynicism, condescension, and superficial flippancy.  She also discovers some truths about her parents, about grief, about relationships, and about apologies and forgiveness.  Most importantly, though, she learns the importance of trying to understand people who are different from her, rather than writing them off or underestimating them.

While Anna Breslaw covers all of these topics and details in her book, Scarlett Epstein Hates It Here, she also explores a minor theme about how time online can divert an individual from studying and can take a toll on social development and social interaction skills outside of internet forums.  Rich in pop culture, Breslaw’s book is sure to delight readers.