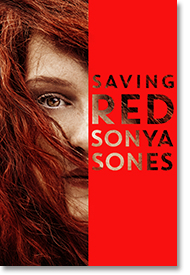 Had Molly Rosenberg known that middle school was going to be the high point in her life, she would have tried harder to enjoy it.  Now, she’s a freshman at Santa Monica High School in Southern California, and she’s friendless and living a life haunted by past mistakes and regrets.  Because she suffers from severe anxiety and panic attacks, her service dog Pixel coaxes her to breathe.

But life wasn’t always like this.  Before everything changed, the Rosenbergs were a regular family who played Monopoly or snuggled under blankets to watch old movies together.  “After the awful thing that happened last winter” (47), Mom became addicted to medical marijuana, Dad became a workaholic, and Molly acquired Pixel.

On a community service project for Freshman Seminar, while counting homeless people, Molly encounters a girl with red hair, a girl with whom she forms a connection.    Because she can’t glue her mixed up family back together again, Molly decides to reunite Red with hers.  So begins, Operation Red.

As she searches for Red so that she can help her, Molly meets Cristo, a boy who not only makes her glow but makes her “legs feel like two very overcooked noodles” (90).  But Red, who dances in the rain or to salsa music with equal abandon, isn’t eager to receive Molly’s charity.  As Molly gets to know Red, she learns that Red is mentally ill. Her illness keeps her from being scared of the things she should be wary of, so Molly–with Cristo’s help–vows to keep Red safe, to provide for Red what she’d want someone to do for her missing brother, Noah. Noah was not only Molly’s confidante but a brother who would build dollhouse furniture out of Popsicle sticks, play Barbies with his sister, or cancel a date to help Molly memorize her bat mitzvah prayers.

Readers who enjoy books written in verse will likely enjoy Saving Red by Sonya Sones.  This is an important book for starting a conversation about mental illness and about the serious effects of anxiety and depression.  Sones approaches these real but sensitive issues in a way that young adults can understand.  Saving Red is a quick read that offers powerful, hopeful messages while remaining honest: “Real life isn’t a fairy tale” (375).

Another of the book’s bonuses is what the reader can learn about Jewish cultural practices.  Bat mitzvah, gelt, latkes, matzo balls, Hanukkah, menorah lighting, dreidels, and chocolate coins, all provide opportunities for cultural discussion.

Furthermore, several times while reading, I wanted to imitate some of Sones’ poems.  “I Mean Seriously, God” reminded me of Judith Viorst’s “It’s a Wonderful World But They Made a Few Mistakes,” a poem that lends itself to imitation or to copy-change.  “So Here’s What I’ve Learned So Far,” “Then,” “When a Boy Walks You Home,” and “When You’re Riding Your Bike” are four other “chapters” that stimulate a writer’s imagination.