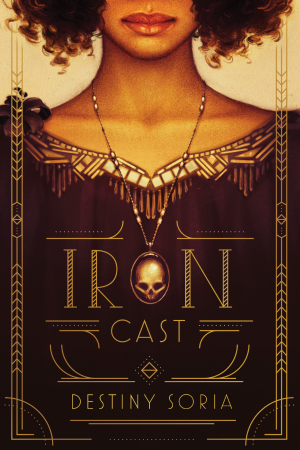 By: Donna
In: Historical Fiction (YA), Mystery & Suspense (YA), Sci-Fi & Fantasy (YA), Young Adult Book Reviews 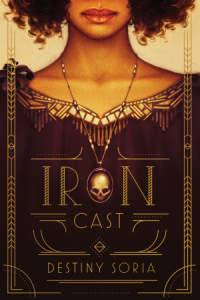 What if poets, musicians, painters, and actors—who have art and talent in their blood—could use their craft to weave magic, much like the magic that scientists work with chemical reactions, cymatics, and other means to make the impossible suddenly appear possible?  This is only one of the questions that Destiny Soria explores in her debut book, Iron Cast.  Her plot and its conflicts make readers think more deeply to wonder why society is so eager to marginalize those who are different.  Although differences in socioeconomic circumstances, language, ethnicity, age, race, place, religion, exceptionality, gender, and health have potential to cause division, the world might be a different place if we saw difference as a special ability rather than as a disability or a liability.

Set in Boston in 1919, this historical fantasy takes place largely in a club called the Cast Iron, a sanctuary for hemopaths, whose blood has a visceral aversion to iron that science has yet to explain.  Originally, the Cast Iron was a quiet, unremarkable pub patronized by Boston intellectuals and idealists.  Now, its current owner, Johnny Dervish has transformed it into an iron-free safe haven for the city’s artists and hemopaths with the special ability to make people feel any emotion, convincing them to behave in a way orchestrated by the hemopath.  Patrons without this blood condition, called regs in Soria’s novel, come to the club for its spectacular shows with their mind-altering music.  In a delicate art, songsmiths conjure emotions and wordsmiths create illusions, producing an irresistible escapism experience.  Many of these artists are young people, whose families don’t accept them or who experience rejection from a society that considers them freaks.

One of these artists, Corrine Wells discovered her affliction to iron when she was twelve-years-old and away at Billings Academy, a boarding school in Pennsylvania.  Almost too ill to function and barely able to leave her room, Corrine received help from the sympathetic headmistress, who recognized her symptoms and knew that Johnny was sheltering hemopaths in Boston from the Hemopath Protection Agency who registers the afflicted.  Johnny helped Corrine develop her talent as a wordsmith and gave her a home, so she feels a deep sense of loyalty to him and to her friends, other hemopaths like Ada Navarra.  To the gentle, swaying murmur of Corrine’s voice, Ada uses her violin to add nostalgia, hope, joy, or longing so that whatever imagery the audience envisions settles over each person like a mist.  The two have been together for four years, bonding like sisters and altering reality.  Aware of their talents, Johnny—who is really a pre-Prohibition era ganster—exploits them, making them run scams and shake-downs.

So now, it is illegal to perform or participate in any sort of hemopath activity.  Lawmakers have actually written laws that make it possible for police to arrest hemopaths for performing their manipulations or even for gathering in groups.  If caught, the hemopaths are taken to Haversham Asylum for Afflictions of the Blood, where Dr. Knox is performing mysterious experiments in the basement, treating hemopaths like test subjects with no choices, no recourse, and no power.  In 1919, some people believed that the bodies of dead hemopaths should become government property for scientific experimentation.  While Ada and Corrine, together with Charlie Lewis, Gabriel Stone, Sebastian Temple (aka Saint), and other friends and allies, are determined to find out what is going on in the basement of Haversham, Johnny disappears.  Whether he has been captured or killed by a rival gang remains a temporary mystery for Iron Cast readers.

Besides the where’s Johnny and the what’s going on in the basement questions, the novel abounds with additional mysteries: Who’s Alice, what will happen to the hemopaths without a protector, and how will their families react to the inevitable truth?  Add those to the mysteries of human behavior, and a convoluted story will unfold.