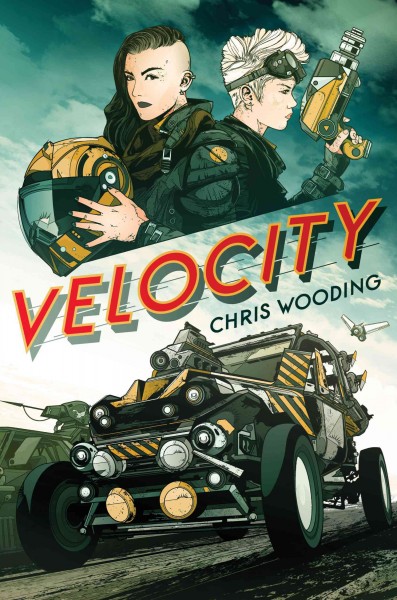 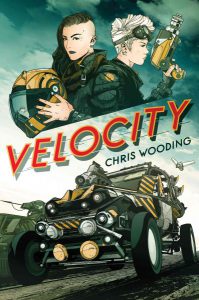 Maximum racing is dangerous; one out of ten cars doesn’t make it to the finish line.  But race car driver Cassica Hayle is fast, flighty, and full of fierce life.  Possessing an addictive, restle
ss energy and delighted by chaos and speed, Cassica craves life in the fast lane and wants to escape Coppermouth,  a barely surviving, backwater town where the stars at night are actually “restless orbital weapons moving steadily, left over from the Omniwar”(30) when death machines  “destroyed whole cities with lances of fire from space” (31). Now, in Coppermouth ,  people die from dust lung, a respiratory affliction resulting from dust blowing off microscopic metal eating nanobots that corrode everything they settle on.  Cassica, who lost her mother to dust lung, dreams of racing beyond the borders of poverty and loss and stagnation.

After Cassica and her sane and sensible but surly mechanic/technician Shiara DuCal win the Jessen Plains Race with Maisie, their car built on a shoestring from the ground up, the pair has the opportunity to escape Coppermouth, maybe even find fame on the racing circuit and win tickets to Olympus, a city in space where lights sparkle and Celestials live in luxury, basking in an alien glow.  Working with scrap and guile, Shiara has a talent for making unpromising materials produce horsepower.   With her advance planning, route and fuel consumption calculations, skill and smarts, coupled with Cassica’s devil-may-care driving, the team of boondock girls may have the recipe for making dreams come true.

Their chance comes when they are discovered by Harlan Massini, a slick and oily man with promises for fame.  Mr. Massini compliments their daring and invention for overcoming the limitations of their vehicle and outracing their opponents in superior cars.  Little do Shiara and Cassica know then, but they will soon be groomed for the Widowmaker, television’s biggest reality show event in the world—an event controlled by those with money, where neither talent nor tactics, timing, and hard work alone can win races.  A racer needs sponsors, fancy cars, and good looks  to perform in this fake world on the ultimate stage, where personalities are manufactured and people love the raw emotion, violence, action, and drama.  Much like the obstacles in Suzanne Collins’ The Hunger Games, the races in Velocity by Chris Wooding are orchestrated with malicious intent, rigged by people with a disregard for decency, men who “[prize] money over fair competition, appearances over talent, sponsors over souls” (301).  The perilous terrain, mutant beasts, traps, and other savage conditions ensure that viewers will watch pretty people die.  Cassica is willing to take the risks, for the glamour, the parties, and the crowd’s adoration, but Shiara doesn’t share her dream of being a “performin’ monkey,” of being part of the lie they’re selling—a  dirty, tawdry delusion.

Wooding tells this dystopian tale of two badland girls using short, simple sentences for speed, made action-packed with participles.  His style and imagination leave readers wondering whether the team will be squashed like bugs or will endure like cock roaches and whether their friendship will survive the test of differing aspirations.  With Velocity, Wooding asks some challenging questions about social hierarchies that privilege some and deprive others, about the current attraction of reality television and its possible repercussions, about the value placed on physical beauty, and about the function of entertainment in society.