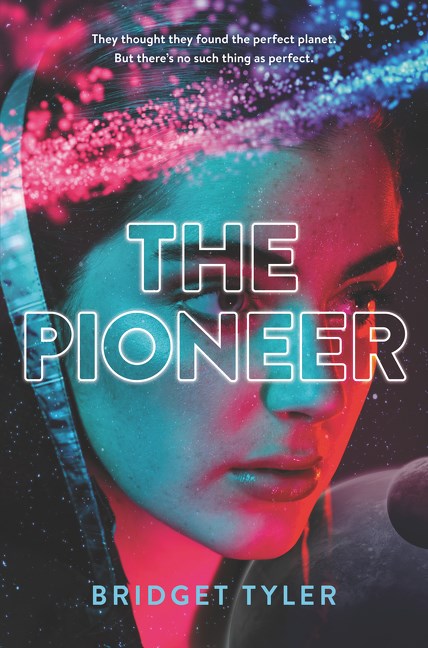 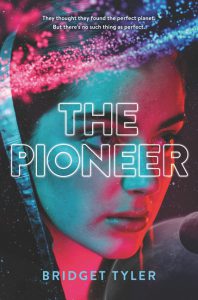 After years of ecological abuse, Earth is being held together with solar paneling and wishful thinking.  As Earth undergoes a restoration project that includes filtering carbon out of the air, reforesting the Amazon, returning planetary temperatures to normal ranges, launching a filtration system for the oceans, and initiating breeding programs to reverse species extinctions, many humans will need a new home.  Because survival of the human species actually depends on a population reduction on Earth, an International Space Agency (ISA) ship leaves Earth to inhabit Tau Ceti e, a world similar to Earth.

While those statements outline the basic plot arc of Bridget Tyler’s new science fiction novel, The Pioneer engages the reader with its imaginary new worlds and the creatures who inhabit them.  Readers will also find reasons to invest in Tyler’s richly developed characters and to take an interest in their plights and ethical dilemmas.

Beth, Teddy, and Joanna Watson are three sibling teens whose lives have been destined for space travel and space exploration.  In a rather lengthy prologue, readers learn that Joanna (aka Jo, Joey, and Hotshot) is a pilot who fully qualified for solo suborbital, orbital, and open-space flight before her fifteenth birthday.  However, she endures an accident that medically disqualifies her from flying, so Leela takes Jo’s place as a pilot.  Because neither girl is great at hiding her feelings, the general level of “jerkitude” is mutual and their relationship stretches to near-breaking.

Feeling like a ghost in her life, Jo is held hostage in her own sadness and guilt, not just survivor’s guilt but guilt about the accident itself.  As she struggles to understand the nightmares, she almost loses sight of the dream.

Recalling her dad’s saying, “Idle hands ruin plans,” Jo is determined to be part of something and to again taste danger.  While exploring the planet Tau, which will be her new home, Jo discovers that the ISA did not provide complete survey reports of Tau Ceti e, so she decides to find out why and to close the gaps.  Given the misinformation and secrecy, Jo isn’t sure whom she can trust and to what degree her own parents may be involved in the plot to withhold this information.

After encountering the Sorrow, a species whose sensitivity to light and whose sonar style communication are unfamiliar, Jo wonders about the ISA’s commitment to finding an uninhabited planet, so as to avoid committing genocide.   The report also indicated an absence of predators, another inaccuracy Jo uncovers when she encounters the phytoraptors.  Jo worries for the survival of these species and about humanity’s ability to harmoniously coexist with them.

Jo’s romantic interest, Jay Lim aids Jo in her rebellion against the ISA, who is defying its own rules about not disrupting the native ecosystem.  However, Jay says, “Those rules . . . always struck me as wishful thinking anyway. . . . You can’t become a part of something without changing it.  Whether you want to or not” (88).  Although Jo and her family have been working their entire lives on resolving how humans can be a part of a place without environmental impact, she’s discovering that may not be possible.  Instead, she wonders how any changes can contribute to the good of the planet.  Wishing that something unpredictable can turn out right in the end makes for a complicated endeavor with unanticipated casualties for Jo and those she cares about.  In the process, Jo learns about the sacrifices that some individuals will make and the the extent to which someone will go to save another’s life.

Like any good science fiction writer, Tyler is fond of posing “what if” questions and then spinning out a scenario to answer those questions.  By exaggerating a present problem, these authors intend to warn society about the error in our ways and thereby inspire change.  Designed to raise awareness of environmental problems, Tyler’s novel also asks important ethical questions.  It presents current issues of concern by providing lessons on how to change lifestyles and attitudes.  In the process, Jo learns to walk in the present since it is the only way to get to see the future.  She also discovers that some creatures don’t understand that a planet is more than the sum of its parts; that destroying pieces of it will prevent the rest from going on like nothing happened.  Finally, she experiences the extensive impact and consequences of one’s choices.