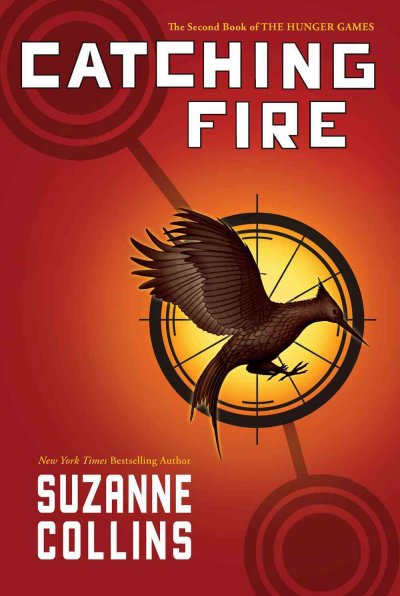 What’s the toughest part about Hunger Games? After finishing it, the next book that I read just doesn’t have as much grab for me.

I wonder if that’s a problem for Suzanne Collins. As I talked with students and staff about what to expect with Catching Fire, we had no clue how the author would follow up such a great story.

Now I can’t figure which one’s my favorite.

We knew that there would be rebellion. There’s no way that Capitol officials would let Katniss’ act of defiance go unnoticed. In the first book it is made very clear that Panem resembles Ancient Rome, hosting the games to crush the spirits of the rebels by crushing their kids.

Book two starts out with Katniss on a victory tour. The haunting President Snow warns her that her actions affect more than herself, a poorly veiled threat that her family is in danger unless districts are calmed down into obedience.

While people hold on to a strand of hope, they can still fight.

Katniss has been swept up in events larger than herself and has become the face of the resistance. In this way it keeps with characteristics of a successful YA book: a protagonist that ends up on her own and must figure out who she is, what she truly stands for, as forces push her from all sides.

I’ll be honest: in the first book, I cheered when the games started. I couldn’t put the book down once we had seen the tributes standing on the platforms in the minefield. I stayed up until the early morning, finishing the book and many caffeinated beverages.

In Catching Fire, seeing people thrown into the Games sickened me. I was literally distressed for the characters and angry at Panem’s injustice. I couldn’t stand the Capitol citizens’ compliance with how things were being run.

I have a renewed sense of social activism after reading the book. Seeing food so readily available, with Capitol socialites purposely vomiting so that they could gorge on more, reminded me that there are so many hungry people out there, in our country and others. We need to take action to help our fellow humans – and we’re running out of time.

If there’s one theme repeated throughout the book, it’s that your own mortality is a countdown. We have limited time. Katniss realizes what her goal is and is in a race to meet that goal before her life is snuffed out. She sees the other victors for who they are, as people scarred from the previous Games, people who need compassion but have been dehumanized for society’s entertainment. (One of the victors paints his nightmares from the Games. He has not slept a solid night since being thrown into the arena.)

Pretty challenging stuff for a teen book. But what Suzanne Collins does extremely well is take issues like social concern and mortality and blend it with an engaging, action-packed story. It’s a story that junior high and high school students can connect with, as evidenced by my students constantly having this book on a wait list.

When September 1 comes around, make sure you grab a copy (or four) to continue one of my favorite series. With book two, we knew that there would be rebellion. Book three is scheduled to wrap up the trilogy – I think I have a clue as to what will happen next, but I know that Suzanne Collins will blow away my expectations.