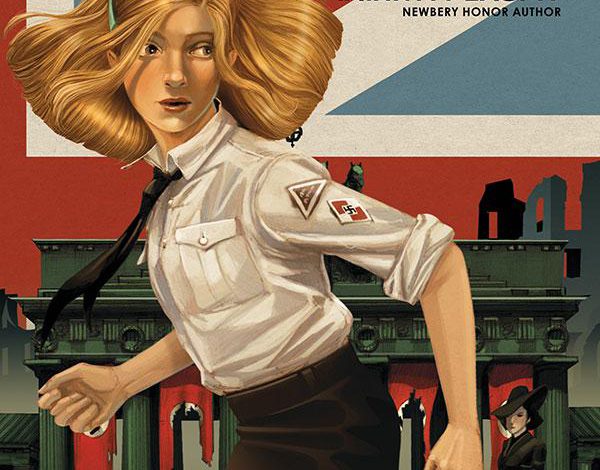 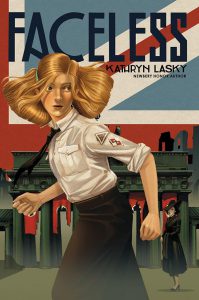 Newbery Honor-winning author Kathryn Lasky has written her fourth book about World War II: Faceless. In this historical fiction account set in 1944, thirteen-year-old Alice Winfield is a member of the most-skilled intelligence service on earth. Working for MI6, Alice and her family belong to a small clan of spies called the Tabula Rasa.  Because they can pass unseen through enemy lines and “become” other people without being recognized, they are, essentially, faceless.

Alice’s older sister Louise has determined that blending in and being anonymous is not for her, so she decides to have plastic surgery so that her face is memorable. Her choice to abandon the family business leaves Alice feeling like she has lost her sister.

Dissembling and disguising her true feelings, Alice must infiltrate Hitler’s inner circle; she must become one of “them” so as to seamlessly blend in as she works to undermine oppression. On her mission, she meets David Bloom, a young Jewish boy who has been separated from his family after being evicted from their home by German officials.

Alice befriends David, who is living in the garden behind the house and eating from the alley trash cans. Knowing that empathy can be a spy’s undoing, she still brings him food, blankets, and a warm coat.

As Alice goes about her work, the reader meets several personalities in this evil government during the most dangerous war in the history of the United Kingdom. Adolph Hitler’s beliefs and his “dark heart of hatred” (81) frighten Alice to her core. She can’t believe that someone human can create a deadly infection of hatred among people. Spreading through propaganda, this hatred seeps through everything good and honorable. “This was to be her mission now. Her war. To find out the secrets of this evil Nazi regime and report them to His Majesty’s secret service” (81).

Part of Alice’s training for her mission includes listening to Richard Wagner’s Der Ring des Nibelungen, otherwise known as The Ring cycle. Considered to be Hitler’s favorite, “he was said to play the records constantly and often staged parts of it in his various residences” (116).  Allusions to this opera occur throughout the novel, paralleling the unraveling of Hitler’s mind as Alice works to make him feel his destiny as one of the chosen.

Alice vows to use her spy traits—sharp thinking, logic, stealth, planning, and patience—to take down this wicked man and those in the Wolf’s Lair. She is ready to fight with “blood, toil, sweat, and tears against this monstrous tyranny” (212).

A parallel plot is Alice’s suspicion that she has seen her sister on the streets of Berlin. Is it possible that her mind so wants to believe that her sister hasn’t abandoned the family for Bletchley, a code cipher school for the British government in London, that she is imagining her into existence? Alice’s mind splinters thoughts of her sister like a prism splinters color.

Whether or not Lasky intends for her title to also allude to the medical condition prosopagnosia, which affects around two in every 100 people in the UK, is unclear.  Prosopagnosia is the inability to recognize people by their faces alone.

In writing this book, Lasky steps into another person’s skin and finds the empathy that she believes lives in every human soul.