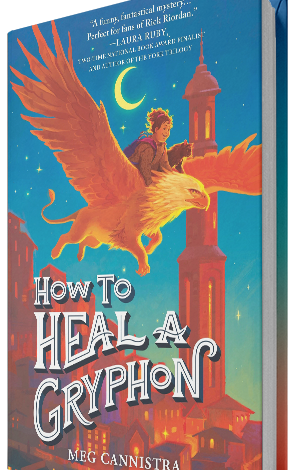 How to Heal a Gryphon by Meg Cannistra

Perfect for animal lovers, How to Heal a Gryphon by Meg Cannistra puts a magical spin on veterinarians and showcases a plump witch with spunk and sass. Giada Bellantuonos is twelve, and on her thirteenth birthday, she is expected to take the oath to become a guaritrice and to join the family business. These guardians of the people use their power to strengthen people.

However, the family business is not Giada’s dream. She has lived in the shadow of her famous brother Rocco, and wants her own identity as a famous fixer. Rather than heal people, she wishes instead to honor Diana, goddess of wild animals, and to take care of her creatures. Furthermore, to Giada, “rules feel like wearing an itchy wool sweater in the middle of summer” (29). Although she has the support of her best friend, Alessia Marinis, Rocco calls Giada an embarrassment. Giada also fears her father’s disappointment about breaking tradition. In anger, Giada wishes Rocco would disappear, so when he does, she blames herself. After all, her aunt Clementina tells her: “Negativity gets you nowhere. It’s entirely possible to speak things into existence” (49).

Now it is up to Giada to rescue her brother, who has been taken to the underground city of Malafi, where the Streghe del Malocchio are keeping Rocco. As Giada is packing to depart, she notices a black cat that has been following her and confronts it, saying she doesn’t need any more bad luck. But Sinistro turns out to be Giada’s familiar. The two misunderstood individuals decide to protect one another. Giada modulates her magic to communicate with Sinistro, just as she does with other animals. Their adventure ___

In addition to sharing her theme that the love and support of family is as powerful as any kind of magic, Cannistra also reveals several morals. One suggests that traditions are meant to evolve. “If we all stayed put and kept repeating the same things as our ancestors, we’d get nowhere. New ideas aren’t a bad thing, nor are they harbingers of ill fortune” (294), Zia Clementina states.

Another moral reveals how difference isn’t a defect, that we need to shift our perspective to embrace other ways of knowing. Sinistro tells Giada: “When you’re so accustomed to living one way, it’s hard to realize there are options” (139). On a related note, jumping to conclusions about people without first seeing from their perspectives can be dangerous, according to Sinistro: “Their actions can be perceived as evil. They’re temperamental and territorial. And the Streghe del Malocchio in Malifi might lean more into those behaviors than others elsewhere. But as a whole, they strive for balance, regardless of what means they take to achieve it. . . . When the world’s scales weigh too heavy on one side, . . . They use their magic and position of power to create stability” (165).

Ultimately, Cannistra’s book is an adventure-filled fantasy about the value of following one’s dreams as a means to feeling whole and fulfilled. It is also about finding the courage to stand up for what we want.