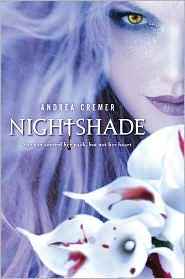 By: Cori
In: Romance (YA), Supernatural & Horror (YA), Young Adult Book Reviews

The paranormal romance genre has a steamy new edition in Andrea

Cremer’s Nightshade.  Of all the “Twilight-alikes” to date, Cremer’s sexy tale of lust, forbidden love, menacing evil, supernatural wolves, warlocks and ghouls comes the closest to capturing the steamy, angst-filled essence of the Bella-Edward-Jacob triangle and the bone-chilling, otherworldliness of the Volturi, the Cullens, and the Quileute Pack.

Calla Tor is no shrinking violet; she’s the 17 year old alpha of her pack of shape/dimension shifting human/wolves  (known as The Guardians) whose sworn duty is to protect and defend the mission and sacred places of the powerful, secretive, and menacing Keepers.  Calla is bold, strong, and determined and she’s also destined to mate with sexy Ren Laroche, the alpha wolf of the Keepers’ other pack.  Their attraction to each other is intense, lusty, and animal in every way; but as strong as their magnetism is, there’ll be a conflict of wills when the two turn 18 and must mate, since Calla will have to submit her authority and pack to Ren and be forever bound to his will.

But in the weeks before her union, Calla makes a bold, and perhaps life-threatening choice: she saves the life of gorgeous hiker after he’s mauled by a grizzly.  She commits the first of many punishable-by-death trespasses when she gives the dying human some of her life-restoring Guardian blood.  And at the moment of resurrecting him, a longing and passion she never new existed is ignited in her body and soul. As fate would have it, the teen Calla saved, Shay, enrolls in her high school and is thrust into a central role in her life.  Torn between her fiery desire for Ren, her intense attraction to Shay, and her life of duty and servitude, Calla is directed by her Keeper to protect Shay from the Keepers’ long-time enemy, the Searchers, who are bent on kidnapping the teen for some unknown purpose.

Cremer cleverly reveals the intricacies and history of Calla’s world to the reader as she and Shay begin a forbidden and perilous “research project” to unravel the mysteries surrounding Calla’s upcoming union with Ren, Shay’s presence in their small town, the sacred cave that Calla’s pack is sworn to protect, and the Guardians’ ages-long servitude to the Keepers. The more they uncover about the past, the more they realize the injustice of the present and the terrible danger of the future.  Making everything more intense and complicated is the steamy love triangle that’s developed between Ren, Calla, and Shay; both young men ignite different, but very powerful, emotions and feelings in Calla and just as she is starting to doubt everything about the life she believed she was living, now she’s caught between two opposing, but powerfully attractive, mates.

Cremer provides no resolutions at the end of Nightshade; instead, she leaves both Calla and the reader caught in a trap of danger, desire, and breathless waiting until this sexy, suspenseful tale continues.