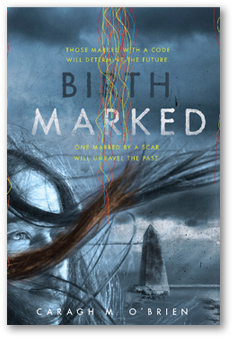 By: Cori
In: Romance (YA), Sci-Fi & Fantasy (YA), Young Adult Book Reviews 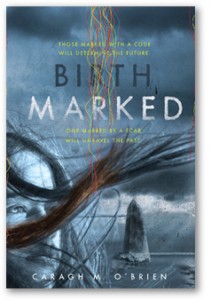 In the not-too-distant future, the world has been baked dry and select people live a fairly comfortable existence in walled colonies, dependent on hoarded technology, water reserves, and the resourceful masses who exist outside the enclave walls from whom life-sustaining resources are taken on a regular basis.  Aside from foodstuffs and other tangible goods taken in by the Enclave, the most unsettling quota the masses outside the wall have to provide is newborn babies.

That’s the world 16 year old Gaia Stone occupies; she lives outside the Enclave walls and is apprenticed to her mother, one of the few midwives whose sworn duty is to take hours-old newborns from their mothers and deliver them to the guards at the Enclave gates. When Birthmarked, CaraghM. O’Brien’s novel opens, Gaia has just successfully delivered her first child and has to make the long walk to the Enclave gates for the first time alone.  But when Gaia arrives home later that night, she finds the Enclave guards awaiting her; her parents have been arrested and her home has been ransacked and she doesn’t know why. Her mother’s long time friend warns Gaia to flee and gives Gaia a coded ribbon her mother carried, with no explanation of why her parents have been taken or what secret the ribbon holds.  Instead of running away, Gaia decides to track down and save her parents which leads her deep into the Enclave itself.  There she finds that the world inside is much more dangerous and insidious that she was lead to believe, and very few people can be trusted or are who they seem to be.  Gaia is drawn, reluctantly but strongly, towards the handsome Captain Grey, a man with his own secrets, and over the course of many twists and turns, discovers the unsettling truths behind the Enclave and its need for children.

Gaia is a likeable, brave, and determined protagonist whose force of will propels the story forward.  She’s the kind of heroine teen readers who like Katniss from The Hunger Gameswill enjoy getting to know.  O’Brien does a good job creating a definite sense of place and time, making the world of the Enclave and Gaia’s village real and easily to visualize.  There are a number of plot twists and a steady pace that helps to keep pages turning, but too many times too many aspects of the book feel awkward and forced: whether it was characters, plot, narrative, or the budding romance between Gaia and Captain Grey.  The Enclave’s power didn’t seem ominous or threatening enough, and the narrative was confused and dense at times.  Left open for a possible sequel that may offer more, on its own Birthmarked doesn’t quite live up to the promise of its idea.