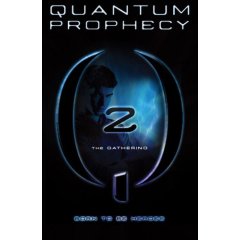 I have a copy of The Gathering by Michael Carroll and at first I didn’t realize that it was book two in a series (yes, I see the giant “2” on the cover. Whatever.). I’ll definitely go back to read book 1, but I was able to follow along alright.

10 years ago the superheroes were the rescuers of the human race. The supervillain Ragnarok created a device to strip the heroes of their powers. Now, the children of the heroes are finding out that they inherited some powers.

If you like shows like Heroes or enjoyed the giant list of superhero movies this summer, you’ll like this book. Just like in TIM where I needed a part of the city stepped on by page 30, in The Gathering I needed to see a super brawl. Expectations met.

This book definitely feels like X-Men or Hancock, where it’s a little grittier, so I don’t recommend it for elementary grades (but that’s not its target audience). Lots of action, lots of comic book necessities: a hero’s reputation being tainted, a superforce targeting the superhero headquarters, government conspiracies.

This book is Alex Rider if Alex Rider could shoot lightning out of his hands.