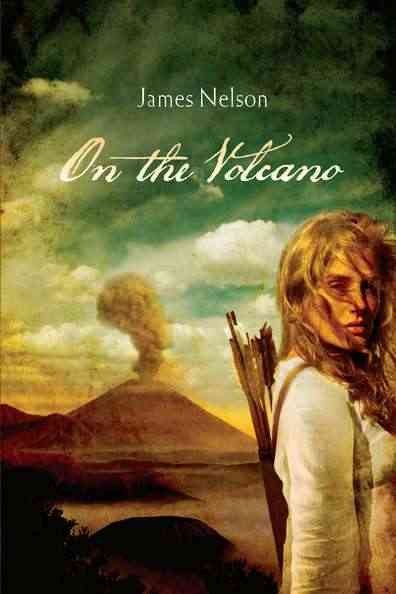 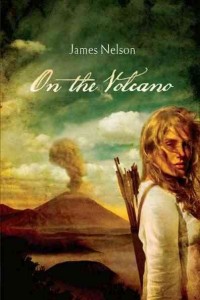 Set in 1881 in New Pacifica (a fictional territory of the US, much like the Pacific Northwest), James Nelson’s On the Volcano is a coming of age story, laced with romance, loss, and adventure. Katie was born in a small cabin on the rim of a powerful volcano, far from the turmoil and dangers of the pioneer world. She’s only ever known her beloved father and two other adults, Lorraine – a travelling healer who stays with them from time to time, and Old Dan- a nomad who drops in every decade or so to visit.  Approaching 16, Katie wonders about the world off the volcano, daydreams about visiting a town and possibly making a friend her own age, or maybe even meeting a handsome young man. When her father finally agrees to take her with him on his next trip to town, Katie’s beside herself with excitement and anticipation.
But town isn’t what she expected and the people she meets bring danger and promise into her life.  Unsuspecting of the danger that is coming, Katie returns to her peaceful life on the volcano, hunting for food, preparing for winter, and day-dreaming about the handsome sheriff’s deputy she met in town.  When a shifty, dangerous young man she met in town seeks out rumors of gold that is hidden on the volcano, he happens upon Katie in the woods and attempts to rape her.  To protect his daughter and their way of life,  Katie’s father kills the man and they dump his body into the volcano.  The family now realizes that their lives will never be the same, but none of them imagine how drastically and quickly it will change.

Nelson’s description of frontier life is full of detail and depth.  I’m not sure why he chose to create the fictional world of “New Pacifica,” since it wouldn’t have seemed out of place to have simply set the story in 1880’s Pacific Northwest.  Katie is a likeable, self-sufficient young woman, whose coming of age story will enchant readers looking for a strong yet sensitive heroine, tender romance, and a picturesque setting.