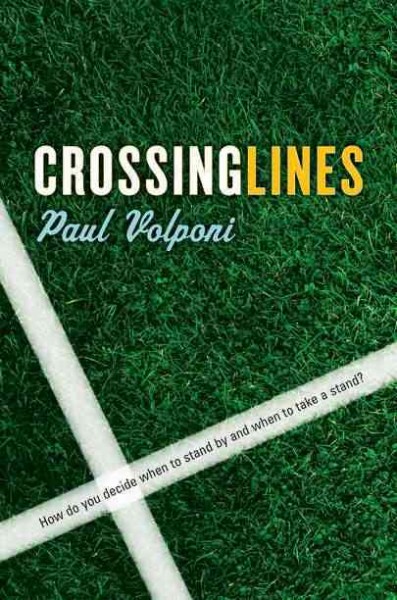 By: Cori
In: Action & Adventure (YA), On the Edge, Realistic Fiction (YA), Sports (YA), Young Adult Book Reviews 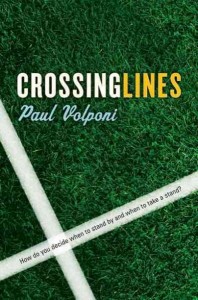 Paul Volponi has a talent for capturing the authentic voice of teen guys.  His books regularly display a straightforward, economic style that gets directly to the bare bones of his teen protagonists’ struggles with relationships, right and wrong, maturity, and a whole host of other real-life issues.  In every Volponi book I’ve read, I am always struck by the authenticity of the characters, the moral ambiguities, and the masterful blend of reality and fiction.   And his latest, Crossing Lines, is no exception, focusing on bullies, victims, and the people caught between them.

The tension builds slowly over the course of the first few weeks of school:  Adonis, a senior, is a starter on the school’s varsity football team and dating one of the hottest girls in school.  Alan, the new kid, is openly gay and after joining the school’s Fashion Club, starts wearing lipstick and cross-dressing at school.  It doesn’t take long for Alan to become a pariah among certain groups and a victim of the football team’s aggressive taunts, teasing, and bullying.  At first Adonis is OK going along with the rude remarks, teasing, and general belittling that the other jocks direct at Alan, particularly because he sees Alan always coming back at the taunts with zingers of his own, and so Adonis tells himself Alan can handle it.  But Adonis’ sister and girlfriend are friends with Alan and support his “transformation,” and they expect Adonis to treat Alan with respect and dignity and to stand up to his teammates.  When things heat up and some of the jocks come up with a plan to publicly humiliate Alan and possibly hurt him, Adonis feels the space he’s been hiding in between both sides tighten and he’ll have to make a very tough choice about which line he’s willing to cross.