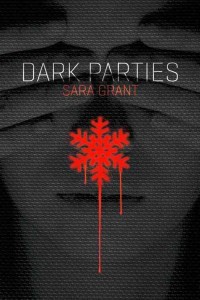 In a world where everyone looks like everyone else, no one questions the status quo, technology and all consumer goods are being recycled since there’s nothing new anymore, and the government controls every aspect of its citizens’ lives, there’s virtually no room left for personal expression, uniqueness, or individual freedoms.  Basically, this is the formula for just about every dystopia in recent memory: The Handmaid’s Tale,  The Giver,  1984,  The City of Ember, Maze Runner, Birthmarked,  The Forest of Hands and Teeth,  Matched,  The Hunger Games,  Grace, and the list goes on and on…  The newest entry into this genre is Sara Grant’s Dark Parties,  which for all intents and purposes borrows, cherry-picks, and somewhat messily reinterprets many of the conventions, horrors, and rebellions in these aforementioned (and many others) novels.

16 year old Neva didn’t think of herself as the sort of person who dreamt of bigger things and a better life. She knew there was something wrong with the tightly controlled life inside the Protectosphere, but never gave herself enough credit for being able to affect any real change.  She’s kept a secret journal, however, listing the names of “The Missing” – people who’ve just disappeared and are never spoken of again – wondering what fate could have befallen them.  Her best friend Sanna is the bold one, the one who challenges the status quo with small, personal sized rebellions.  But then Sanna convinces Neva to host a “dark party,” inviting their friends to commit to a more public act of civil disobedience, in the hopes of spawning an underground rebellion.  Too soon, though, their rebellion is derailed, a sexy, secretive boy comes between them, and Neva is left searching for clues and staying one step ahead of the authorities all on her own.   Eventually, Neva realizes that what’s she’s really fighting for is a chance at true happiness, a life without constraints, and the possibility of being truly independent, but that choice will force her to give up everyone she’s loved and face alone the greatest unknown of all.