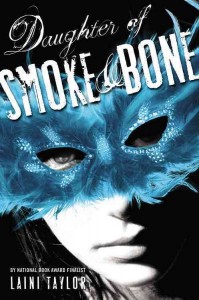 I am in love with this book.

Gorgeously detailed, complexly plotted, riveting, sensuous, mysterious and smoldering – and I could go on and on.  Laini Taylor’s 2009 National Book Award finalist Lips Touch, was well-crafted, consuming, and oh-so-delicious, making me very eager to immerse myself in her latest, Daughter of Smoke & Bone.   And I was not disappointed.  Taylor draws her characters with the grace of a painter, flushing them out with shadow and light, giving vivid detail to even the minor ones so that its easy to visualize, empathize, and fall in love with them.  The settings – Prague, Paris, Morocco, and Elsewhere – are luminous with detail and beguiling in their portrayal.  But even better than character, better than setting, in Daughter of Smoke & Bone, is the richly layered story.

The complexity and tension build slowly, like building a fire – starting first with a little kindling we meet Karou, a 17 year old art student in Prague whose striking beauty, peacock blue hair, and tattoos hide a loneliness and a yearning she can share with no one.  Karou’s past is a mystery that she weaves with a wry smile: she shares her sketchbook full of fantastical creatures with her fellow students, although she never shares the “truth” of her past or the reasons for her frequent and sudden disappearances. As the slow flames of Taylor’s story consume the kindling and grow stronger, so the plot deepens as we learn that Karou herself has no memory of how she came to be raised by a “family” of chimaera in a different dimension called Elsewhere, spending her youth at the side of a powerful magical creature who trades wishes for the teeth of beasts and men.   Karou’s world is on the brink of peril when what could best be called “angels” descend from the sky, marking the portals to Elsewhere with a burning handprint and threaten her only gateway to her family.  The novel’s slowly tended fire explodes when Karou makes a startling discovery in the secret passages of Elsewhere, the portals are all destroyed on the same night trapping her in the human world, and an angel who should be her mortal enemy seems to hold the key to the mystery of her past.

Desire, love, loyalty, pain, death and rebirth are the fires that burn Daughter of Smoke & Bone.  I was drawn as a moth to a flame, hoping to keep my distance and read slowly, almost languidly; but I soon realized that I had been caught up in this imaginative tale, consuming page after page as if I were chasing a wildfire.  Now I am left with smoking embers, craving the sequel that will take too long to appear. It’s a cruel, but satisfying, fate.