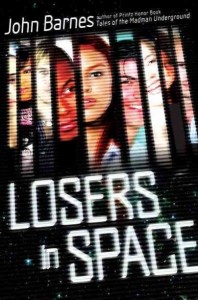 I’ll admit right away that I was really excited when I saw the ARC for this book and I had really high hopes for it. Keeping in mind that John Barnes‘   tales of the MADMAN underground is one of the best young adult books I’ve ever read, it was hard for me to wait until Losers in Space got to the top of the pile (I know, why wait, right? But sometimes the waiting builds up the anticipation and makes the reward so much better…)

So, I was out of the office yesterday and I thought, it’s a perfect day to dive in. And what I found wasn’t what I expected – at first.  I should have known that Losers in Space might mean the story is set in space, and it is, in 2129-2131 on the way from Earth to Mars, beyond and back again, but I wasn’t prepared for the “hard science fiction” that awaited me. As Barnes rightly shares in one of the many “Notes for the Interested” peppered throughout the book, most Sci-Fi lovers come from the fantasy side (my favorite TV show of all time is Star Trek: The Next Generation)  so the thorough interweaving and plot dependence on math, science, physics, etc., took some getting used to on my part.  The “Notes” interludes can be skipped, as Barnes suggests, for those who just want to get on with the story, so they’re only mildly disruptive and they do diminish as Losers progresses.

After I got into the book, past the technology, future world lingo, and familiar with the teens in the story, then the magic took hold.  I was on the Virgo with Susan and the rest, scared, freaked out, and resolutely determined to see them survive both the immense, indiscriminate dangers of space and the intimate, calculated dangers of a sociopath among them.  In addition to an interesting plot, fraught with danger and technical ingenuity, what Barnes proved so skillfully in tales he again shows in Losers: a fine ear for capturing the voice of teens who feel like they’re so screwed up and isolated, who want to be special, be understood, and be loved.  What Losers in Space reminded me is that this very universal human need is as real in space in 2129 as it is everywhere on Earth today.