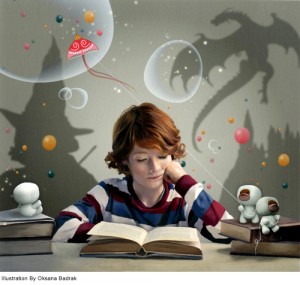 Though it happened more than 50 years ago, I keep the sensation of that moment. It’s every bit as vivid as the memory of pedaling my bike down the sidewalk and suddenly realizing I was alone, that my father was no longer there steadying and guiding me. Or the feeling of counting backward under ether, “ten…, nine….”

I was in first grade, I know that, in Miss Carnahan’s class, though I don’t think I was in school when it happened. Most of the specifics of the event have fallen away. There’s really just this high-magnification, slow-motion rendition, a single moment zoomed in on, and, all these years later, made mythological. I’m sitting somewhere with Rudyard Kipling’s The Jungle Book in my lap, and it happens. Happens after who knows how many times of it not happening. Something has changed between the last time I looked at the book and now, a kind of ripening or opening out. That’s how it feels. The look of letters turns into words with sounds. I feel my eyes and ears come together as I move, slowly, wobblingly, and the sense suddenly comes. In big rough jerks, but then faster, so that in a sentence or two I’ve moved from not riding to riding: It was seven o’clock of a very warm evening…. I romanticize, I compress, I dramatize—I’m sure I do. But that’s how it lives in me, the moment that changed my life forever, by breaking me out of what had been just my thoughts, my imagination, and opening the door on thoughts and imaginings that were, and remain, past counting. I had learned to read.

Learned to read: I had learned that I could do it. This was something very different than hearing stories from my mother at bedtime or from Miss Carnahan when we made a circle. This was suddenly power and control, and I knew, maybe for the first time, that I had something that couldn’t be undone or taken away. It was as if I had all at once, in the space of a long breath, doubled what I was. I could read.

And I read. Not heroically or precociously. But once I started, I never stopped. I took out books on library day and brought them home—books about snakes, Indian chiefs, boys having adventures—and I checked off as many squares as I was allowed when the Scholastic Book Club’s order forms were passed out. I could barely contain my excitement when the teacher brought in the big box and gave us our selections. A book was to me, then, as now, a token of possibility, of privacy and self-containment. My greatest joy, then, as now, was to find a place away from others, to be alone and have it happen again, the renewable miracle: to feel the world I live in start to slowly recede while at the same time another, different world builds itself more and more distinctly around me.