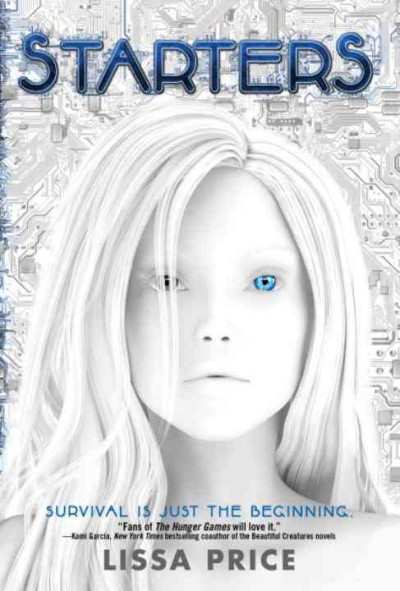 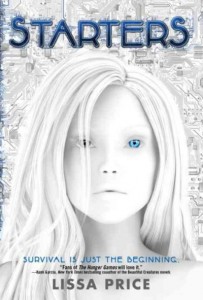 There’s a lot going on in debut author Lissa Price’s dystopian sci-fi action romance Starters.  Within the first 3 pages I wrote “Dollhouse?” at the top of the page, realizing the multiple plot, setting, and character similarities to Joss Whedon’s short-lived TV Series, Dollhouse.  Then there’s the subtle inspiration and re-envisioning of the Cinderella fairytale, with a sci-fi element added in, reminding me of Melissa Marr’s fantastic Cinder.  And of course the post-apocalyptic world, ravaged by the Spore Wars and the smart determined young heroine willing to risk herself to save her younger sibling will be a great “what do I read next?” after The Hunger Games.  With this and so many more elements from recent popular culture crammed into 335 pages, it would be easy to fall into a derivative rehash that fails to live up to any or all of its inspirations.  But such is the imagination, skill, and vision of this debut author:  Starters is a smart, engaging,action-packed book pulls you quickly in, gets your heart beating and your head wondering, and mesmerizes from first page to last.

Like many cities across war ravaged United States, in downtown LA, no adult between the ages of 20 – 100 is left alive. Unclaimed minors, “Starters”, scavenge on the war-torn streets while the age-enhanced “Enders” (people over 100) live plush, technology-comforted lives, blissfully removed from the daily toil of the world’s remaining youth.  Callie and her 7 year old brother Tyler have been on the run since their parents died in the war, running from abandoned building to building, barely scraping together enough food to stay alive, fearing the Elder Marshals trying to institutionalize them, the unfriendly gangs of Starters roaming the streets, and an infection that’s slowly killing Tyler.  The only way for Callie to get any money and treatment for Tyler is the shadowy services offered by Prime Destinations.  But what Prime Destinations is doing isn’t ethical or legal: they take healthy unclaimed teens, implant a neural control device, and then “rent” their bodies to rich Enders looking to relive their lost youth.  When Callie discovers the grisly truth behind the glossy surface and decides to put a stop to a plan that will mean certain death for thousands of teens, she becomes the target of powerful forces and must rely on her courage, wits, and the help of a few good people to survive.