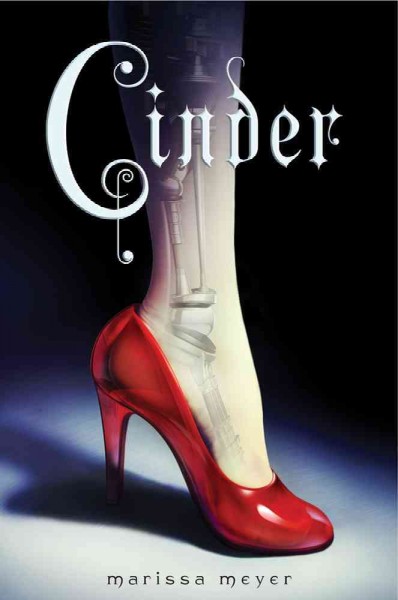 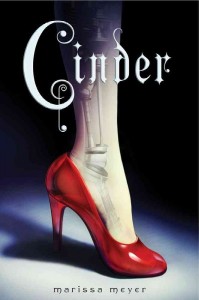 I’ve been looking forward to Cinder: The Lunar Chronicles Book One by Marissa Meyer since the ARC came a few months ago. As the book got closer to the top of my pending stack, I kept glancing at the cover and wondering, excitedly, what the retelling of Cinderella as an android would be like.  So finally, on Tuesday, Cinder was at the top of the pile. I don’t remember much about Wednesday since I spent most of the day reading.  And despite a little awkward editing, I was rewarded for my patience with an engaging, fast-paced, creative story.

In this era of re-imagining and retellings of well-known stories, legends, and fairy tales (are you looking forward to the 2 new Snow White movies coming out in 2012, one starring Kristen Stewart?), Meyer’s take on the classic is pretty imaginative.  Cinder isn’t an android, but a cyborg – human with metal, mechanical, and computer parts – who is a second class citizen in a future Earth. Unable to remember her life before age 11 when she became a cyborg, Cinder lives as the ward of a resentful woman, with 2 delicate, beautiful human step-sisters, in the huge city of New Beijing, in the Eastern Commonwealth, formed after WWIV from the ruins of China and most of the Far East.  The city’s, and Earth’s, very survival rests on the shoulders of handsome Prince Kai, who must choose to submit his Commonwealth to the demands of a cruel, “magical” people living on the Moon, or somehow muster the courage to stand up to a threat no one on Earth believes he can overcome.

With the threat of war hovering behind a potential alliance with the Lunars, a deadly, mysterious plague is ravaging the entire world and it has just struck close to home.  Cinder’s stepmother “volunteers” her to be test subject in the vain search for a plague antidote, and thus she unwittingly becomes intertwined with the intrigues at the Royal Court, caught up in a forbidden relationship with Prince Kai, and all the while being confronted with the mysteries of her forgotten past and her unique physical, genetic, and computer make up.  With little help or hope, Cinder must try to unravel the secrets of her past to save not only herself and her beloved Prince, but everyone on Planet Earth.

It’s refreshing and promising to have heroines who, while they may be in love with the handsome prince, aren’t relying on him to rescue them and make sure they live “happily ever after.”  I hope that the spunk, ingenuity, and resolve Cinder has shown in Book One will be continued and expanded on in the 3 more books planned in The Lunar Chronicles.  That’d be my wish come true.