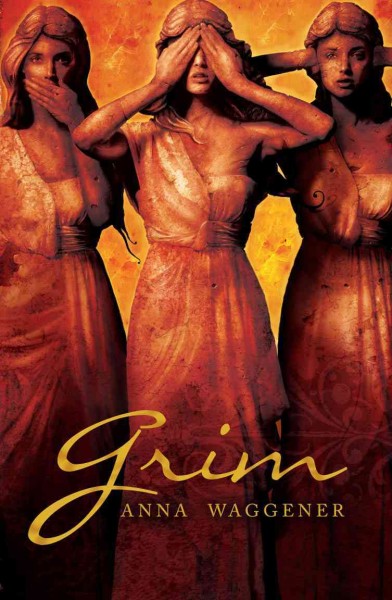 By: Cori
In: Mystery & Suspense (YA), Sci-Fi & Fantasy (YA), Supernatural & Horror (YA), Young Adult Book Reviews 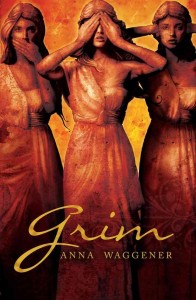 Anna Waggener’s debut, Grim,  is an oddly befuddling, somewhat incomprehensible story that didn’t “come together” until about 150 pages into the book.  Switching between multiple points of view, jumping through time and space, and not giving any real explanation for much of anything, it took a lot of patience on my part to wait for that crucial “oh, now I understand” moment.  Erika, a mid-thirties divorced mother of 3 who’s unhappy with her life, is killed driving home from work on a dark stretch of highway; Rebecca, her reckless 18 year old daughter and Shawn, her straightlaced 16 year old son,  are wracked with grief and loss and at each other’s throats all the time; 8 year old Meg is naively innocent in her confusion over where Mommy has gone; Jeremiah, a wretched exile, is forced to kidnap Erika’s soul; and the supernatural inhabitants of Limbo, from the Fates to the Seraphs and the lost souls of humanity, are all pawns in an otherworldly eternal game of courtly intrigue.

So many questions abound, it’s hard to know where to start, or which will find a satisfactory conclusion: is Erika really dead? If so, how can she use Jeremy’s magic knife to reach Shaun through his dreams?  Will brother and sister come together to keep their abusive, alcoholic father from getting custody over sweet Megan?  How will Jeremiah use Erika to win his way back into his father’s court?  What about his ruthless half-brothers who will stop at nothing to destroy him?  And what will happen when three living human children are brought into the Land of Limbo where only departed souls and other supernaturals should be?  The balance of the universe could be destroyed, all for the love of a green eyed, red haired woman and a lonely old man held captive by tradition and pride.

Waggener throws a lot into Grim and in trying to slowly reveal the backstory, the plot, and heighten the suspense, Grim jumps around constantly; which seems only to muddy the waters and elicit an occasional “huh?” from the reader.  Unfortunately, in the end, Grim leaves the reader wandering dejectedly around in the grey twilight of Limbo with little hope or desire for rescue.