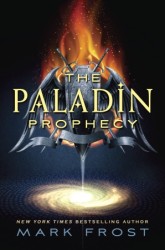 For a thrilling, fast-paced, and action-packed paranormal adventure, Mark  Frost’s  Book One in The Paladin Prophecy series is a must read.  In a class with books like Robert Ludlum’s Jason Bourne novels, The Hunger Games trilogy by Suzanne Collins, and The Maze Runner by James Dashner, Frost’s book explores how disaster wakes up the system.

The story features 15-year-old Will West who lives a quiet, contained, and invisible life to ensure he remains mediocre and under the radar of powerful forces who might exploit his true talent.  For him, school is a daily drone, “Novocain for the brain” (4), until Dr. Robbins shows up and offers him a position at a prestigious preparatory school whose goal is to groom young people for future leadership—less sinister perhaps but still similar to the Aryan race ideology.  When he blows his anonymity, exposing his brain and brawn as beyond traditional measures with his perfect test score and his speed, Will is forced to abandon his parents and home and to run for his life.

Thrust into a paranormal war and unsure he’ll ever be as snug and safe as a bank vault again, Will encounters nightmarish, garish creatures with only his wits and Dad’s List of Rules to Live By as resources until he meets his guardian angel, Dave.  A former member of the Australian and New Zealand Army Corp—an expeditionary task force formed in World War One—Dave battles demons to protect his ward and equips Will with survival gear and advice.

Although his pedigree pales in comparison to some of the uncommon people capable of uncommon things who attend the Center for Integrated Learning, Will develops a kinship with his pod of roommates: Brooke, Nick, Elise, and Ajay. The fiercely talented fearsome five, however, discovers itself at odds with bullies Lyle Ogilvy, Todd Hodak, and their gang of followers.  Despite the bullying, at the Center Will suddenly finds himself stimulated and invigorated, his mind stretched in directions no one had ever taken him before.  But he also finds himself in danger when he begins to unravel the mystery of the Paladin logo.  The Paladins are holy warriors dedicated to fighting evil, but by whose definition—those who value goodness and virtue or those who consider goodness and virtue false comforts for losers?  These twelve disciples defend the principles of unity, wholeness, and balance. Their goal is “Making Better Men for the Benefit of Man” (443).  Will and his friends are left to sort through the mystery of what that all means and where allegiance lies, while also trying to determine the whereabouts of the vanished Ronnie Murso and the identity of mysterious personalities like the locker room proctor named Nepsted.

Besides being a master of intrigue, Frost artfully creates his characters, with Nick—an especially humorous and fiercely talented gymnast—ranked as a favorite.  And like most great science fiction-fantasy authors, Frost provokes thought about contemporary society and its foibles, offering some serious pondering points.  Frost stretches the imagination while insinuating how present actions might affect our political, philosophical, and social future.  Watch the book trailer, and you’ll be hooked!