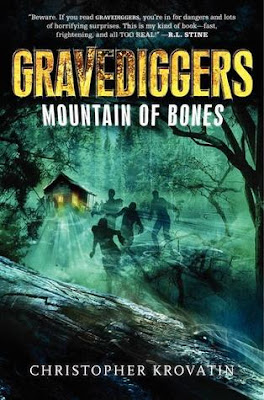 Christopher Krovatin’s recent book Gravediggers: Mountain of Bones is designed for readers  who don’t mind horror or creepy concepts like zombies.  Following a plotline similar to that found in R.L. Stine’s Goosebumps series, this book features three middle-schooler’s perspectives: Ian, a hard-headed athlete who thinks muscle will help him outrun any danger; Kendra, a sharp-minded library resident who relies on her brain to out-think a crisis; and PJ, a nervous camera addict who controls his fears by framing and directing shots.

On a field trip designed to “separate the wolves from the poodles,” the trio engages with Homeroom Earth, an education program about survival in the wilds of Montana.  When they stray from the path to chase a monster buck, the trio gets lost somewhere in the Bitterroot Mountains, unaware of their having wandered into territory that has become a vessel used by evil forces, one that might mean their demise.  Faced with incomprehensible symbols and pursued by a pack of hungry ghouls, Ian, Kendra, and PJ learn the definition of brilliance: “Being able to comprehend any situation [and knowing that] if one must leap into the fray, one’s mind must be experienced enough to think its way through even the most unbelievable or upsetting scenario” (135).  They also redefine adventure, which they decide is not getting tattooed or going bungee jumping but dedicating every day to the fight against evil and accepting the diagnosis that they are “stress-crazed hallucinating crackpots” (295).