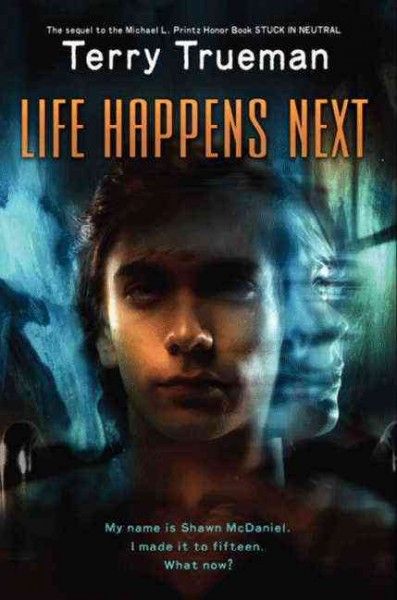 In the sequel to his Printz Honor book, Stuck in Neutral, Terry Trueman takes us back into Shawn McDaniel’s life:  “Night before last my dad tried to kill me. At least, I’m pretty sure that was his plan. For weeks and months I’d been worrying about it. I guess Dad had his reasons, but he didn’t do it. Obviously. Lucky me, huh? Sorry, sarcasm is one of the few weapons I possess.” (1)

The power of Stuck in Neutral  lay in the dynamic between Shawn and his dad, as both characters struggled to understand and connect with each other.  In Life Happens Next, Shawn’s dad is on the periphery and other characters come more into focus: Shawn’s athletic hero brother Paul, his hard working mom, sister Cindy, and the girl who has captured Shawn’s heart, Cindy’s best friend Ally.  But the relationship at the core of Life Happens Next is between Shawn and Debi, a forty-one year old woman with Down syndrome who comes to live in the McDaniel household.  There is something about Debi and her dog Rusty that the others in Shawn’s life don’t seem to possess: for all of her challenges, Debi has the ability to perceive and understand people in a way that may make a real connection with Shawn possible.  Shawn doesn’t claim to understand what’s happening between himself and Debi, but he certainly finds something there that he didn’t believe would ever happen for him, outside of his dreams.

Sometimes painful, as Shawn occasionally slips into frustration, depression and hopelessness about his condition, but ultimately hopeful, Life Happens Next isn’t the powerhouse, compelling look at an entirely original character that Stuck in Neutral is.  What this book is, however, is a testament to the life-altering power of connection and the potency of hope and positivity for anyone who feels cornered by circumstances or their own physical shortcomings.