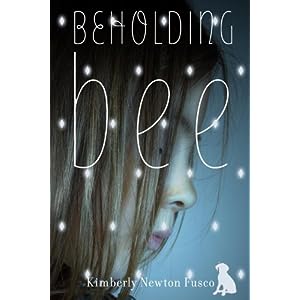 et in the early 1940s, Kimberly Newton Fusco’s upcoming release, Beholding Bee, features Beatrice Rose Hockenberry, an adolescent girl whose life readers follow from age eleven to thirteen.   During this time of victory gardens, sugar rations, and fuel stamps, Bee—whose  parents died when she was four—works for a travelling carnival show and lives in the back of a hauling truck with sixteen year old Pauline as her guardian.

Bee’s greatest nemesis is Ellis, the owner of the show, who threatens to put Bee on display in the freak show because she has a birthmark, “the color of rose at dusk” (4), that stretches from her hairline to below her cheek in the shape of a diamond.  Bee also suffers from insecurity as a result of all the stares and taunting.  On days when the teasing escalates or Bee feels especially lost and wishes to be invisible, an old lady in an orange floppy hat appears to lead Bee out of the crowd to safety.  Pauline calls these visions fairy tales, but the vision is real for Bee.

On the carnival circuit, Bee befriends Cordelia, the runt in the pig race operated by Bobby, a young man kept from military service due to a high school sports injury.  Bee relates to both Bobby and Cordelia, who also know criticism for their differences.  When a stray dog the color of butterscotch arrives, Bee makes him her own and names him Peabody.  Peabody becomes Bee’s confidant and companion, a friend worth more than gold.  In her pets, Bee finds comfort, knowing how snuggling helps return a sense of security, confidence, and love.

After Bee is attacked by two bullies, Bobby teaches Bee how to run and how to spit, both  defenses that come in handy more than once in the novel.  At first Bee resists Bobby’s training, but she soon realizes how running helps clear the mind and puts everything in perspective, providing prime thinking time.  From running, Bee also learns other lessons she can apply to life: “If you use up all of your heart at the start, you’ll never find your second wind” (63).   Bobby also explains: “You have to want to get better.  You have to look for your own finish line and tell yourself you will cross it (79).

When Arthur arrives, like a tidal wave, he pulls Pauline and Bee apart.  Soon, Pauline is assigned to Poughkeepsie for the stationary carnival Ellis establishes there and Bobby runs away to build bomber planes—leaving Bee adrift.  Abandoned and determined to find a home of her own, Bee sets off on an incredible journey with Cordelia and Peabody in tow and the lady in the orange floppy hat leading the way.

On her journey, Bee encounters many obstacles, but she eventually finds her “aunts,” Abigail Swift and Elizabeth Potter, who teach her several survival skills.  These lessons include independence, self-reliance, and self-confidence, telling her “If you hide, you become no one in particular (137).  At the insistence of her aunts, Bee enrolls in school, where she gets assigned to the special education classroom because of her reticence and incorrigibility.  Here, she befriends Ruth Ellen and her family, who become like a family to Bee.  Together they fight the injustice of disparate educational resources.  The school principal insists exceptional children need to be separated in a class by themselves; “they need the care and attention that can only be provided when they are separate” (279).  Conversely, Ruth Ellen’s mama insists “they need to be included; they don’t need to be looked at” (279).

Besides historicizing inclusion policies and rights for the handicapped, Fusco’s historical fiction shares details on additional civil rights.  Bee’s Aunt Abigail claims: “I do believe a woman should be allowed to vote and seek public office, Beatrice.  I do believe slavery is a sin and that all people should have the same rights as white men” (321).

Ultimately, Beatrice emerges as a strong role model for young girls.  Bee not only discovers her identity, she learns to have compassion for others who are hurting and grows to accept alternate perspectives, realizing that some people try to make others come around to their way of thinking, as if they are the only ones who know the true way about things.  Bee would rather see her birthmark as an angel kiss than as a disfiguring handicap, believing she is special when she thinks like this.  With self-acceptance , Bee radiates with the strength and beauty of a diamond.