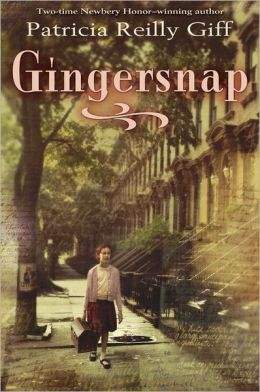 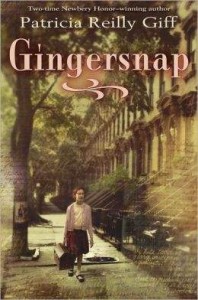 In a beautifully crafted, delicately told story about hope, family, and love, Patricia Reilly Giff enchanted me with Gingersnap.

Set in 1945 in a small town in Upstate New York, Jayna lives with her older brother, and only family, Rob.  When he’s called to active duty on a naval battleship in the Pacific, Jayna goes to stay with their difficult landlady.  But before he left, Rob told Jayna about a suitcase in his closet that contains a cookbook with a name and an address for a bakery in Brooklyn. Could it be a clue to family they don’t know they have?  Then Rob’s ship is sunk and he’s declared missing, so Jayna makes the only choice that seems available to her: she and her turtle take the suitcase and the recipe book and head for Brooklyn.  Encouraged by the comforting voice of a ghostly guide, Jayna makes her way to the small neighborhood bakery, called Gingersnap, where she meets a kind old woman whom Jayna can only hope is her grandmother, Elise.

Convincing Elise to let her stay, Jayna shares her talent for making just the right soup at the right time – “Feel Better Vegetable Soup” “Good-Luck Soup” – with the customers and friends of the bakery, and the two settle into a comfortable place while Jayna anxiously awaits word about Rob.  Surrounded by others who are also hanging on to the slightest hope for their husbands, fathers and sons, Jayna finds some comfort in having a daily purpose and a “family” brought together by the trials of wartime.

Jayna is one of those young girls whose spunk, steadfastness, and heart immediately foster a connection to all those around her, including the reader.  She’s the kind of girl you’d want as a friend, be grateful for as a sister, and in whose company it’s a pleasure to spend an afternoon. Gingersnap is a wonderfully rich, uplifting story about faith, patience, and the ways in which people come together to form “families” that get us through both good times and difficult ones.