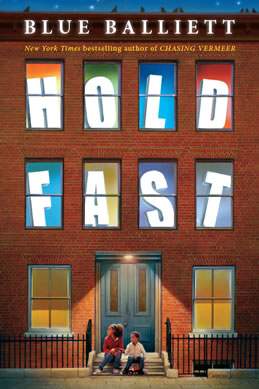 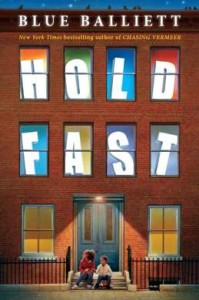 Sometimes when I like a book a lot, I have a hard time writing a succinct review of it. I just want to tell you everything about it, gush profusely about the use of language, the richness of both the characters and the setting, give a huge shout out for the deftly executed plot, and overwhelm you with so much detail that you don’t even need to read the book itself.  So the book sits on my desk, waiting for my feeble attempts to due it justice.  Blue Balliett‘s latest, Hold Fast, is one of those books.  From the the very first page, I was swept away by the rhythm of this satisfying book.  I just can’t hold off any longer – you’ve got to know about this book and get it on your shelves for your students to read.

11 year old Early Pearl lives in a one room apartment on Chicago’s Southside with her brother Jubilation, her mom, Summer, and her dad, Dashel.  What the family may lack in terms of material goods and money in the bank, they more than make up for in the things in life that really count: love, optimism, togetherness, a love of learning, and faith in a better future.  Dash has big plans for his family and his job at the Chicago Public Library is just the starting point.   But on the coldest, meanest January day in anyone’s memory, Dash disappears without a trace.  People assume he’s up and left the family, but Sum, Early and young Jubie know Dash would never, ever do that. Something terrible has happened to him, and when thugs break into their small home, assaulting them and ransacking the place, the family knows the trouble Dash is in must be worse than they feared.

Fleeing their home in fear, Early, Sum and Jubie end up in one of Chicago’s homeless shelters, penniless and without many options.  But spunky, smart Early finds the courage inside herself to start asking questions, looking for clues, and figuring out the rhythms of the mystery of Dash’s disappearance, the importance of a shelf worn book of Langston Hughes poetry, and the sprawling maze of the Chicago Public Library.  When the riddles and clues start pointing towards the most famous, as yet unsolved, diamond heist in the 20th century, Early can hardly fathom how her father could ever have become involved in something so dangerous and wrong.  With her family running out of time in more ways than one, it’s up to Early to hold fast and trust that she will be able to figure out what’s hidden in plain sight.