It was, I’m sure, pure coincidence that the two books I recently read had main characters named Jane whose death seemed all but inevitable.  Loosely connected by the thread of “Janes in constant danger”, Helen Keeble’s campy, funny debut  Fang Girl and Graham McNamee’s spooky Beyond took me from the dark nights in a British suburb to the even darker, rainy nights in a small village on Canada’s “rain coast.” 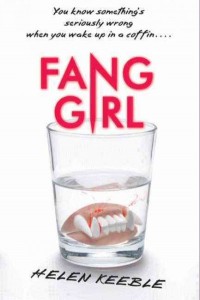 Waking up disoriented, in a small dark space, to the sound of a mobile phone ringing, Xanthe “Jane” Greene, realizes very quickly that she is dead. No, actually, she’s not dead, she’s undead. As in vampire undead.  Which, aside from being disorienting, is actually totally cool since Jane is completely obsessed with all things vampire.   After being dug up from her grave by a caller proclaiming to be her sire, Jane decides the best thing to do is head home to her parent’s house and lay low until she can figure out what to do.  The trouble is, from the first moment she steps out of the grave, Jane is being hunted: by a cute if untrustworthy 19th century vampire; a sexy but way-to-serious vampire hunter; her illusive and unpredictable sire; and a thousand year old vampire elder, all of whom have a stake in controlling Jane’s fate.

Helen Keeble’s Fang Girl  is seriously funny.  It’s campy in the way Buffy the Vampire Slayer is, winking at the reader throughout while also introducing some new and inventive twists on the vampire mythology.  Jane is smart, spunky and tough and the cast of supporting characters are a great ensemble to flush out a fast-paced, irresistible story.  Refreshing authentic dialogue, “you’ve got to be kidding me” situations, and a well plotted mystery make Fang Girl a definite must read. Not to mention a vampiric goldfish. Yep, you did read that right. It’s hilarious.

In Graham McNamee’s Beyond, Jane was born dead. Doctors revived her, but that started something that has been with Jane her whole 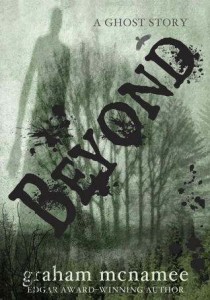 life.  In fact, she’s come close to death a number of times in the intervening 17 years, sometimes as seeming accidents and other times her visits to the ER hint at self-inflicted trauma.  The trouble is, Jane can’t explain to anyone the presence she feels, has felt, inside her head ever since she can remember.  It’s as if her own shadow is a dark, menacing thing and Jane knows it is trying to take her soul away.

As Jane’s “episodes” become more unpredictable and potentially deadly, she stumbles upon a gruesome site in the rain soaked forest outside her small town: a child’s skeleton, showing signs of  a violent death, that’s buried for many years.  For reasons Jane can’t explain, she’s drawn to the mystery of this child, suspecting things she should have no way of knowing and yet feeling the truth of her intuition nonetheless.  In an effort to both face her own demon and unravel the mystery of a long-dead child, Jane is drawn into the realm of a serial killer where she faces an evil in human form against which her shadow pales in comparison.

Dark and creepy with grim twists and a macabre mystery, Beyond is one of those books you should read on a dark and rainy night, when no one else is home and the power is out.  In the end it would seem that our Janes learned to embrace life, live without fear, and kick some butt along the way.