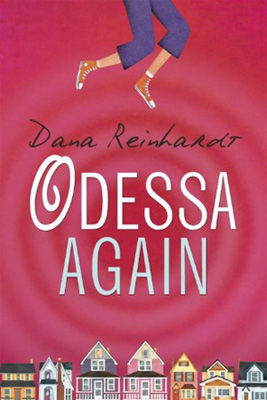 Imagine everything you’d do over if you had the chance.  Ten-year-old Odessa  Green-Light in Odessa Again by Dana Reinhardt  does more than imagine do-overs.  In her attic, jumping gives her the power to make today yesterday all over again.  In the early stages, Odessa’s magic helps her to erase humiliation, misunderstanding, and poorly orchestrated choices, and readers will discover whether Odessa can change the things that matter most in the bewildering life of a tween.  Can she make her life resemble the online game Dreamonica, where she gets to make every decision—“how many puppies, how big a mansion, even what color hair and eyes she had” (107), where dads and moms don’t divorce, where hamsters don’t die, where brothers aren’t so toad-like, and where best friends never step out of the way and let you fall?

Reinhardt spins an endearing, coming-of-age story of two siblings: Odessa, a fourth grader who loves words but not the illogical rules of spelling; and Oliver, a third grader whose terrible shyness gets in his way with friendships but who has a way with rodents.  When the world confounds Odessa, when she feels like the only thing she can count on is her mom saying no to the things she wants most, words bring her peace. Odessa also loves pottery, the color magenta, lollipops that are too big to finish, the feeling of fresh-out-of-the-laundry pajamas, butter-brickle ice-cream, the smell of newly mowed grass, and Theo Summers.  Despite life’s pleasures, Odessa most definitely doesn’t want to be dehyphenated.  She and Oliver both want their old lives back, life before the divorce and Dad’s pending nuptials to Jennifer.  Reinhardt’s book explores whether wishing make something so.